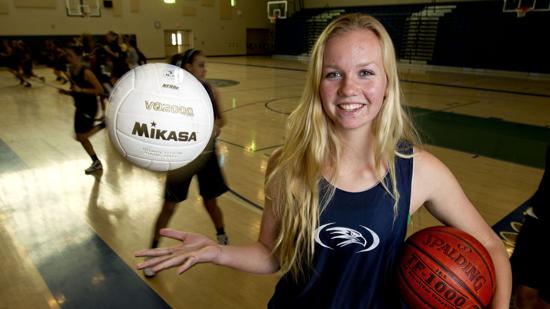 Del Norte senior Lexi Reddick is averaging a double-double in basketball but plans on playing volleyball in college.

Through seventh grade, Lexi Reddick was always in the front row of the class picture.

That seems hard to believe because the 6-foot-2 Reddick is an accomplished two-sport star who is averaging a double-double with 13 points and 13 rebounds a game in basketball.

“I was only 5-5 at that point,” Reddick said. “Then I grew freakishly and now I’m taller than both of my parents.

“Not that I’m complaining because the added height comes in handy in sports.

Q: Were you playing sports back when you were shorter?

A: I’ve played basketball it seems like my whole life. I would always go to Frogs Club One and shootaround with my dad. I was a point guard until eighth grade. Volleyball I didn’t even start until eighth grade and I’d already started this growing spurt.

Q: Was basketball the only thing you played in your younger years?

A: In second grade I played softball and did dance.

Q: What kind of dance?

A: I did hip-hop and ballet.

Q: You did ballet?

A: In my shorter days. I haven’t tried to get up on my toes in a long time.

A: Once this basketball season is over, I’ll become a volleyball player in college.

Q: Do you like playing in the paint in basketball?

A: There’s a lot that goes on in there the refs never see. If you don’t like it, don’t play.

Q: Isn’t it frustrating when the referees rarely call fouls with all the contact in the paint?

A: A lot of times we get fouls called, I think, because we’re taller. Other times, I think they don’t call fouls because we’re so tall. Yes, it does get frustrating. I admit I’ve retaliated a few times.

Q: If you like basketball so much, why are you going to be a volleyball player at the next level?

A: Volleyball is a lot different because there is no contact. You can just play the game and not worry about getting fouled all the time.

Q: How difficult is it going to be to walk away from basketball?

A: I’ve played for so long, I’m not looking forward to that last day on the court. I know the last game is out there and not really that far off now. It won’t be a fun day because I’ve grown up around basketball and having my dad coach me all my life.

Q: Was it difficult to adjust to playing basketball at Del Norte and club volleyball at Coast Volleyball Club at the same time?

A: I can make both work, but the first year was interesting. Going to bed early and doing homework are not very comparable. I’m glad I wasn’t also playing water polo or swimming. I’m not a morning person, so those 5 a.m. practices would he tough to make. I also don’t do well in water.

Q: Have you settled on where you’re going next year?

A: I’m looking at more West Coast schools. I’d go anywhere to play and learn to live in a different area around different people with different lifestyles.

Q: Are you looking forward to graduation?

A: I’m trying to make good use of the time that’s left. How come senior year goes so fast? I still feel like a freshman. It seems like I was a freshman a year or two ago instead of three years.

Sport you would never watch: Soccer.

If you could have a last meal: Sushi.

If you had three wishes, what would you wish for: Live on a beach, have smaller feet, live in Australia.

What three things would you want on a deserted island: My cellphone, a volleyball, endless supply of food.

Talent you’d love to have: Sing.

If you could time travel, would you go to the past or the future: Past.

What do you want to be when you grow up: Sports broadcaster.

What TV show do you hate to miss: “Pretty Little Liars.”

Biggest pet peeve: People who chew with their mouths open.