For the last four seasons, Great Oak High senior Ariel Lassiter has been a feature player in the Southwestern League. 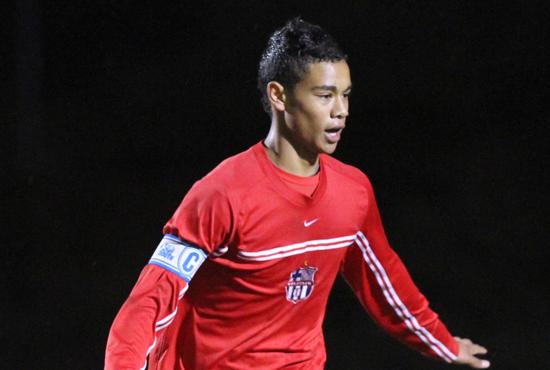 TEMECULA — For the last four seasons, Great Oak High senior Ariel Lassiter has been a feature player in the Southwestern League.

The forward’s speed, combined with his ball control and striking ability have made him a nearly unstoppable force on the Valley boys soccer scene.

Lassiter proved it once again this last week, when he scored the game-winning, and ultimately, the league- title-deciding, goal on a 25-yard free kick in the Wolfpack’s 3-2 victory over Chaparral.

The U-T Californian recently caught up with Lassiter to discuss his background, his father Roy Lassiter’s professional career, and where he sees himself in the future.

Q: How did you first get involved with the game of soccer?

A: Well, my dad used to play professional soccer in the MLS for some of the original teams like Tampa Bay, Miami and Washington, D.C., among others. So when I was younger, I was always around the locker room and was always playing with the ball.

Q: How did it affect you being around the professional aspect of the game?

Q: Do you ever come in contact with any of those players that you looked up to growing up?

A: Once in a while, my dad has reunions or things like that, and I see them, and they always remember me. They remind me of how small I was when they knew me. It’s really cool.

Q: You’re following in your dad’s footsteps as a striker. Does he enjoy coming out and watching you play?

A: Yeah, he gets out there as often as he can, he loves to come out and support me and the team.

Q: Did you play any other sports growing up?

A: I played basketball when I was younger, but that was about the extent of it (laughing).

Q: How do you spend your time off the pitch?

A: I enjoy doing normal stuff, like going to the movies, bowling and playing tennis.

Q: What’s the best game you have ever bowled?

Q: You are going to sign with Cal Poly (San Luis Obispo). What made you want to sign there?

A: Really, their style of play was one of the biggest factors for my decision. It’s total soccer. They put the ball on the ground and they move. Also, I was really impressed with the quality of coaching that was there.

Q: Do you have a favorite professional league?

A: I enjoy the English Premier League a lot. I think it’s different from the rest of the world because of how fast of a pace they play at, and how physical they are.