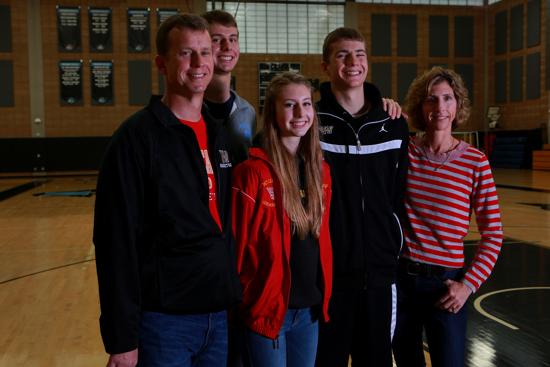 Twice a season, Tim and Linda McWilliam have to really think about what they’re going to wear to a basketball game.

Tim and Linda’s son, Andrew, is a senior basketball/baseball player at Westview.

Casey, the couple’s daughter, is a freshman basketball player at Mt. Carmel.

So when the Wolverines and Sundevils meet in a Palomar League girls-boys high school doubleheader, Tim and Linda have to make sure they’re wearing the right gear at the right game.

“I’ve thought about getting one of those sweatshirts that has one team on one side and a second team on the other,” Tim McWilliam said.

“But I figured changing shirts after the girls game or just wearing neutral colors was best.”

The McWilliams have plenty of athletic gear.

Brian McWilliam, the oldest son, played basketball at Westview and is now playing at Miramar College.

Andrew is a two-sport athlete at Westview, Casey is at Mt. Carmel and Tim is the West Coast crosschecker in the Detroit Tigers’ scouting department.

“Athletics is important in our family, but Linda and I never pushed the kids to play,” Tim McWilliam said. “We exposed the kids to different things, and they gravitated to sports.

“Brian was the first to play and the other kids learned from him. So we did a little more with Andrew. And Casey got involved at an early age.”

Casey is now fully involved at Mt. Carmel, the archrival of the school where her brothers starred.

“I’ve watched my brothers play at Westview since I was 5, and I loved it. So it wasn’t an easy decision not to go to Westview. But my brothers wanted the best for me and supported my decision.

“I want to play at the next level, and I’m willing to work to get there. I don’t want to have any regrets.

“My parents have been awesome. They never push, but they’re there to rebound for us, drive us around, feed us.”

Casey is averaging 17.5 points and five rebounds for the Sundevils as a freshman. She leads the team with 61 3-pointers.

“No one put pressure on Casey to choose a school,” Jollett said. “But we’re glad she chose Mt. Carmel.

“She’s a very intelligent player, has a very high basketball IQ. She really understands the game. She can make the great pass, but she always makes the smart pass.

“She’s a great shooter and a great competitor. She needs to get stronger, and that will come with maturity.

“She’s only a freshman, but you can see she has the ability to play at the next level.”

The next level for Andrew McWilliam will come in baseball.

“I’ve known the McWilliam family for eight years, and the parents are so supportive,” said Westview boys basketball coach Kyle Smith. “The boys are gifted, coordinated, have length and size.

“Plus, they work hard, have a great positive impact on the team. And what you see on the court is what you get in the classroom.”

Andrew is a .325-hitting corner infielder on the baseball team who is being recruited by San Diego State, USD, Arizona, UC Riverside, Utah and McNeese State among others.

“Sports is a seasonal thing for me,” Andrew said. “But my main sport is baseball. I’ve played both sports since I was a little kid. Sometimes it’s hard juggling both sports, hitting with the baseball team, then running over to basketball practice.

“My dad has been a great mentor. And we’re a very close, supportive family. Dad taught all the kids how to shoot correctly. We learned to shoot in the front yard — hand behind the ball, shoot one-handed. And it’s helping.”

Tim McWilliam was an outstanding prep baseball player in Tucson who went on to play at Texas A&M. He was drafted and signed with the Padres. He led the Arizona Rookie League in hitting in 1988 and reached the Triple-A level before a back injury forced him to retire.

He worked for the Padres as a scout in the Four Corners area before moving to Southern California and landing the job with the Tigers.

Linda McWilliam was an all-state prep volleyball player in Arizona. She is now the family videographer.

“Linda and I have learned that our kids do better with support rather than criticism,” Tim said. “We wanted them to be involved in something and are gratified they chose athletics.

“Baseball is the way I make my living, so I’m so glad my kids have had great coaches and had such a positive experience.”