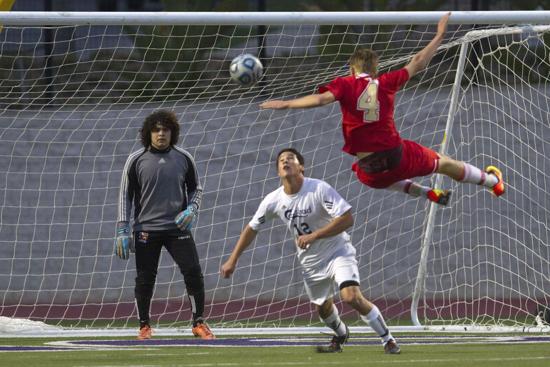 Fallbrook’s McIan Martin leaps for a header in front of Carlsbad’s Jared Marr as goalkeeper Gilberto Cortes defends for the Warriors, who snapped a losing streak against the Lancers.

CARLSBAD — After two years worth of losses, including a pair this season, Fallbrook High finally broke through against Carlsbad.

The third time proved to be the charm.

Sergio Lopez’s second-half goal was the game-winner Thursday as the Warriors posted a 2-1 soccer win over the Lancers.

“We’re here to compete,” Lopez said. “We’re back in it for the league title now.”

Carlsbad plays LCC on Tuesday in hopes of reasserting its league title hopes.

“They were in first place and for a good reason,” Fallbrook coach Jorge Rojas said. “But we came back from a horrible tie with Vista the other day against a team we’ve had trouble with.

“We had to find a way. We waited for the moment of truth and made it count.”

Carlsbad had beaten Fallbrook 3-0 in the Oceanside Showcase Tournament and 6-1 at Fallbrook.

The Lancers appeared headed for another win over the Warriors, grabbing the lead 11 minutes into the game on Gonzalo Jimenez’s goal off a corner kick from Carlos Cruz for a 1-0 lead.

Jimenez collected the kick, whirled and fired a shot past Fallbrook goalkeeper Gilberto Cortes, who had no chance to stop it.

Carlsbad had two golden scoring opportunities, but a header went wide and another shot off a corner kick went over the net.

Less than two minutes later, the Warriors answered back on Joey Martinez’s goal after his defender slipped down. His shot hit off both posts before going in for a 1-1 halftime tie.

“That first goal put us back in the game,” Lopez said. “The second goal put us on top for a change.”

With 33:45 to play, Lopez and Eduardo Ramirez combined on a play that looked more like a practice shot.

Ramirez took a free kick from the right sideline and the ball hit Lopez on the move and the senior headed it right past Carlsbad keeper Matthew Deemer, who had two saves.

“We do work on goals like that,” Lopez said. “The plan was to get a flick and see what happened.

“I looked back just in time to see it go in the net. What a great feeling.”

Unless you’re a Lancer.

“On any given night, anyone can beat you,” Carlsbad coach Jeff Riccitelli said. “They didn’t get a lot of chances, but they wanted it more than we did.

“We scored early and kind of let up. They deserved it. You can’t do that against a good team.”

Not one that has waited more than two years for a victory.