Horizon freshman honed her skills playing against the boys. 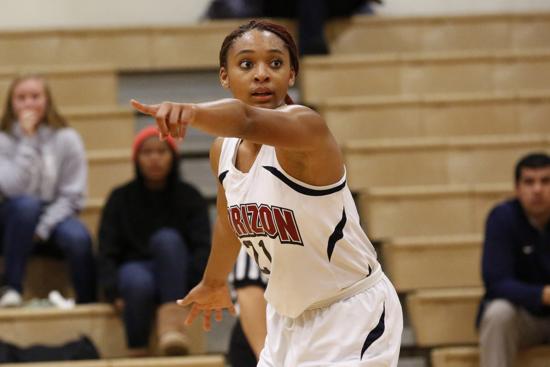 Horizon freshman Di'Jonai Carrington leads the team in assists and averages about 20 points a game for the Panthers.

To be considered a major impact player in girls basketball as a high school freshman, you have to be someone special.

Those who have watched Horizon ninth-grader Di’Jonai Carrington are already putting her in that category.

At 5-feet-11, she’s the same height as Wiggins and a little shorter than Mann, but there so many similarities the comparisons are obvious — especially to Wiggins, who went on to lead Stanford to an NCAA title and currently plays with the WNBA Minnesota Lynx.

•?Both Carrington and Wiggins played against boys and on boys teams early in their careers.

•?Both had pro athletes as fathers — the late Alan Wiggins of the Padres and former Chargers standout Darren Carrington.

•?Both honed their skills playing against older brothers.

•?Carrington plays and Wiggins played with a fire rarely seen at the high school level, stepping up to guide their teams while managing to make older teammates only too happy to join in the fun by dishing out assists whenever teammates get open.

There are lots of differences, too.

For one, Wiggins’ 2000-01 LJCD team posted a 28-5 record en route to the state Division V title. Horizon (17-7) already has more than five losses, but much of that can be credited to playing in the Coastal League against the likes of Division IV La Jolla Country Day and Bishop’s.

And, while Wiggins was coached by Terri Bamford at LJCD, Carrington’s mother, Vickie, oversees Horizon’s program. As any teenager knows, that could produce gigabytes of problems on the court and at home.

Not with the Carringtons.

“Having your mom for the coach is both good and bad,” said Di’Jonai, who recently turned 15. “Sometimes it’s hard because even after the game is over it’s not over. But on the good side, if I have a question I’m not afraid to ask my mom or dad (Darren is the assistant coach).”

It’s not quite as clear cut for Vickie.

“As a parent of a player who is really good, you try hard not to show favoritism,” said the coach. “Having an older daughter (Di’Arra) helped. When I was coaching (club) basketball, I’d see parents get caught up way more than they should. You have to keep a balance.

“The biggest thing is treating each player the same way.”

It is also difficult for Vickie because Di’Jonai started getting involved when she was in the third grade. When Vickie’s summer team was short players, she dressed her daughter, not really planning to use her.

Three players fouled out and she had no choice but to play the third-grader against high school kids. No problem, she held her own. And that’s when Vickie knew for sure Di’Jonai was a special player.

Her answer to what she likes doing most on the court says it all.

“I like passing the ball,” she said. “It makes the others better and makes me feel better. I just hate to lose. I watch my brother play football and I hate it when they lose. I’m kind of a crazy player on the court because out there I can focus on one thing.”

As a fourth-grader Di’Jonai also became the play-by-play announcer for Horizon and only stepped back this fall.

She could announce football, too, because she played Pop Warner as a wide receiver for a few years. Displaying her versatility, she was All-Coastal League first team in volleyball.

Di’Jonai says her strength is her focus, but others marvel at her athleticism.

One who could easily compare her with Wiggins is LJCD’s Terri Bamford, who coached both players.

“Di’Jonai is a tremendous athlete. She just physically dominates the game,” said Bamford. “She’s especially good in transition. She has speed, good vision and can get to the rim.

“But you really can’t compare yet. Look at what Candice achieved — two state titles, two runners-up. Candice had unbelievable basketball skills. But Di’Jonai will be a dominant player the next four years.”