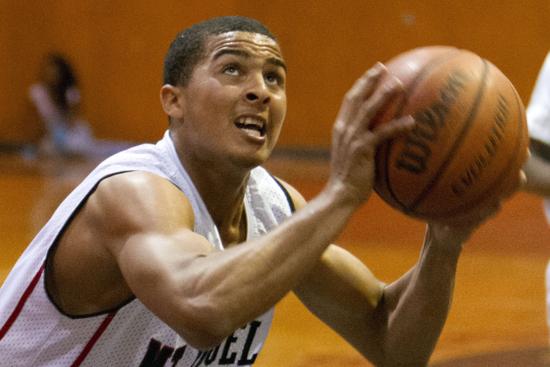 Mount Miguel guard Izzy Wagner scored 54 points in a game this season against Hilltop. Wagner, a 6-foot-2 senior, has grown more than a foot since his freshman year.

Wagner, now a senior at Mount Miguel High, thinks it was when he was about 5. Maguire said it happened naturally, by shortening his given name of Ismail.

Maguire does remember, however, when she started realizing that Wagner was a gifted athlete. He was in the fourth grade and had just started playing 7-on-7 flag football.

“The coaches were just always telling me how good he was,” Maguire said.

But when Wagner reached high school, he decided to apply his athleticism away from the football field.

“I was about 5-foot-1 as a freshman,” Wagner said. “And skinny, too. When I reached high school, the football players were huge, so I knew I wasn’t going to last. I chose basketball.”

It would be hard to argue with Wagner’s decision. The Matadors’ senior guard, who only began to play organized basketball in eighth grade, has grown more than a foot since his freshman year to 6-feet-2. He’s averaging about 35 points per game, a figure that would put Wagner among the top 10 season scoring averages listed in the San Diego Section record book.

Early this season, Wagner lit up Hilltop for 54 points in an 80-43 win over the Lancers. He scored 46 against Rancho Bernardo, 43 against Castle Park, 42 against Foothills Christian, 41 against Clairemont and 40 against Valhalla.

Wagner entered the eighth game of the season, against Liberty Charter, averaging 43.5 points per contest. Rather than inflate his scoring average against the tiny school, Wagner decided to involve his teammates.

Mount Miguel beat Liberty 67-26, and it was just the third game all year that one of Wagner’s teammates scored in double figures, and the first game in which two of his teammates finished with more than 10 points. Wagner scored 14.

“That was something he did on his own. I didn’t have to tell him to be unselfish that game,” said Mount Miguel coach Jay Rowlett, whose team enters the final week of the regular season 15-11 overall and 5-2 in the Grossmont Valley League.

The Matadors can earn at least a share of the league title with a win over El Cajon Valley on Friday in a game that will match Wagner against high-scoring Braves guard Andre Nikkita.

Rowlett, who has coached Wagner all four years in high school, said Wagner has spent long hours in the gym and weight room. Rowlett said Wagner has worked hard and is willing to learn.

“He’s self-motivated,” Maguire said of her only child to participate in athletics. “I don’t have to give him much advice or tell him much.”

That self-motivation can be seen in Wagner’s physique. He has the broad shoulders and muscular frame of a Division I college basketball player.

Wagner recently completed the SAT and is waiting on his scores before deciding which college to attend.

According to Rowlett, smaller schools like San Diego Christian and Colorado State University-Pueblo have shown interest, as well as Division I schools Austin Peay, Cal State Bakersfield and UC Riverside. Coaches from San Diego State and USD have watched him play on multiple occasions.

“My dream is to play in the NBA,” Wagner said. “If that doesn’t work out, I want to be a coach. If I don’t make it, I want to help someone to make it.”