Junior's penalty-kick save allows Norsemen to advance to quarterfinals. 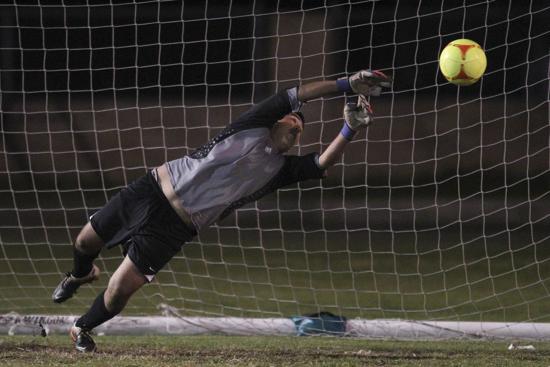 Valhalla junior goalkeeper Febronio “Dimas” Orozco blocks the penalty kick that allowed the Norsemen to defeat Hilltop in the first round of the San Diego Section Division II playoffs. Valhalla prevailed 3-2 on PKs after a 1-1 tie in regulation.

“That instant, I knew exactly where he was going,” Orozco said.

The save propelled Valhalla (12-7-6) past Hilltop (9-8-6) in a penalty kick shootout (3-2), earning the Norsemen a date with top-seeded Mt. Carmel in the San Diego Section Division II quarterfinals Saturday.

“It was ironic seeing the two goalkeepers standing side by side, the other goalie having a foot on him. But Dimas reads the game so well and he is quick like a cat.”

It appeared Valhalla’s season would end yet again against the Lancers at Robert Dodds Stadium — like last season — after Steven Jaramillo netted a goal two minutes into the match, but the Norsemen rallied.

Senior midfielder Andrew Ogilvy scored an injury-time equalizer just before halftime. The ball bounced to his feet around a pile of defenders and he smashed it in.

Forty minutes later, the game remained 1-1, sending the match into a 15-minute golden-goal period that produced a handful of saves from both keepers.

“We didn’t want to make mistakes in the back,” Baughan said.

“A slip of a foot or an overpowering kick happens sometimes,” said Lancers coach John Salts. “It just didn’t go our way. Our guys normally hit 10 out of 10 in practice, but hats off to Valhalla.”

Orozco summed up this match in three words.