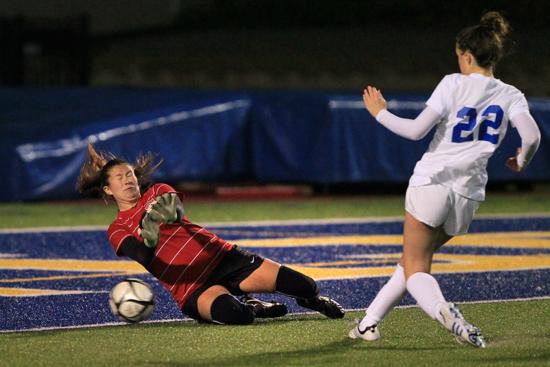 ESCONDIDO — As the second half of Tuesday’s Division I playoff game dragged on without a goal, members of the San Pasqual High girls soccer team couldn’t help but think back to their most recent postseason game.

Last March, the Eagles advanced to the San Diego Section title game before suffering an overtime defeat to Carlsbad. Against Vista on Tuesday, it seemed every chance they had to put away the first-round game was deflected by a goal post, a stray defender’s boot or the brick wall that Panthers keeper Priscilla Suarez had become.

The last thing they wanted was to play another overtime, but it may have been the best thing for them.

“If we don’t get it done (early in overtime), then your back’s against the wall and it just gets harder,” San Pasqual coach Lisa Brown said moments after sophomore Samantha Haynie scored a golden goal just over 10 minutes into overtime to give the Eagles a 2-1 win. “The girls stepped up and took care of it. We didn’t have any urgency (earlier in the game). Once they put a little urgency into it, they saw what can happen.”

The Eagles (13-7-1) may have learned something about themselves, and though Brown isn’t looking too far ahead, she hopes her troops apply those lessons as they march on through the postseason.

Seeded seventh, they will visit second-seeded Eastlake (12-2-6) for a quarterfinal match Friday. A win there and in the Feb. 26 semifinals could set up a finals rematch with top-seeded Carlsbad.

“We have seven seniors this year that really want it bad,” said Brown, whose squad last won a section championship in 2007. “They’ve been there knocking on the door. I think we have just as solid of a team as last year.”

Tuesday’s win was the fifth straight for San Pasqual, which seemed to be sharp in all facets of the game except finishing. The Eagles dominated possession and peppered Suarez with shots all night long.

Vista’s only goal, in the 18th minute, came as the result of a sloppy San Pasqual pass in the midfield followed by a defensive miscommunication.

The Eagles equalized in the 23rd minute on a Sara Janetzky header off a cross from Tatyanna Lewis, and then went stone cold shooting for the rest of regulation. It wasn’t until overtime, when Mari Briggs slipped a pass through two defenders 25 yards out to Haynie and the sophomore beat Suarez to the low left post, that San Pasqual cashed in.

“We worked hard throughout the game to get ourselves to that point,” Haynie said. “It was definitely a team effort. I just had to tap it in.