Centers of attraction have own styles 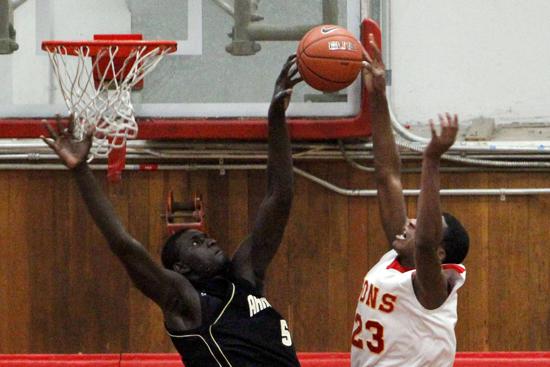 Army-Navy 7-footer Cheikh N'diaye (left) averages about five blocked shots a game, but he also causes many shots to be altered.

Never, though, has the county produced two players with the size and potential of 7-footers Cheikh N’diaye of Army-Navy Academy and Kameron Rooks of Mission Hills High.

Neither could jump directly to the NBA from high school. Both, however, have scholarships to Pac-12 schools — N’diaye to Oregon State and Rooks to Cal.

Both players have their teams poised for a run in the San Diego Section playoffs.

Mission Hills is seeded No. 1 in Division I, where the Grizzlies are ranked No. 13 in the state by MaxPreps.

Army-Navy is seeded No. 1 in Division IV and ranked No. 10 in the state.

While Rooks and N’diaye are big, their games are different.

N’diaye, listed at 7-1, was born in Dakar, Senegal. He came to the U.S. three years ago to play basketball and get a college education.

Rooks is listed at 7 feet but may be three-quarters of an inch taller. His mother and father were outstanding players. Sean Rooks, his father, played 11 seasons in the NBA and now works for the Phoenix Suns. Susie O’Brien, his mother, was a top high school player at San Marcos. She led the county in scoring in 1989, averaging 29.9 points a game.

To show N’diaye’s athleticism, in a recent game against Santa Fe Christian, point guard Devin Watson was on the right leading a break. N’diaye was running the middle. Watson flipped the ball near the rim. N’diaye caught the ball in full flight for a two-hand thunder dunk that brought the crowd to its feet.

Here is what people close to the game think about N’diaye and Rooks:

•?Rooks ranks as a three-star prospect with a 70 rating:

“He has a huge frame and very long arms. He has soft hands and his basketball IQ is quite high. He has a solid drop-step move where he gets defenders on his back and utilizes his length and great hands to convert around the basket.”

•?N’diaye rates as a two-star prospect with a 66 rating:

“He has an impressive frame with extremely long arms. He’s quite coordinated considering his youth. Currently, his strength is his shot-blocking prowess. He has tremendous timing at both ends of the floor. Due to his length he’s quite the challenge to shoot over.”

“N’diaye is a tremendous runner. He can jump and has a great body. He has great lateral movement. He blocks a ton of shots, but he also influences shooters to not challenge him. And if they do, he alters shots.

“Rooks has made quite a bit of progress since his freshman year. He has really worked on his body to get into shape, and his hard work is paying off. He can now play extended minutes where he couldn’t do that early in his career. He has excellent hands. He’s not a shot-blocker like N’diaye, but he influences a ton of shots because he takes very good angles on the defensive end. He’s not a vertical athlete at all. He doesn’t jump as well as N’diaye.

“Mission Hills is a very well-coached team, one of the best-coached teams in Southern California. This is a very impressive team with a star in the middle.”

“Rooks is a load inside. But he’s more than just a big guy. He can shoot it a little bit. He has good moves to the basket. He doesn’t block a lot of shots, but he has a good idea on how to play defense. He forces you to take bad shots or shots you’re not comfortable taking. I like the fact that the guards pass the ball into him in the post, and it’s not a black hole. He feels the double-team and does a good job of finding the open man.

“N’diaye is a little more athletic than Rooks. He’s really long, long arms, long fingers. Because of that he blocks more shots. He runs really well and can get out on a break. He’s a good passer, too.”

•?John Olive, Torrey Pines coach, who played in the NBA and was the head coach at Loyola Marymount:

“Rooks is really solid. He catches the ball really well in the post. He has evolved over the years from a player who was just big, to a big man with some skills. He has good post moves and can score when they get him the ball down low. He doesn’t block as many shots as N’diaye, but both alter so many shots — stuff that doesn’t show up in the box score. Both guys shoot free throws pretty well.”

“N’diaye is so long, long fingers, long arms. That gives him such a big upside. He’s a great shot blocker. He’ll block 10 shots in a game and alter 10 others. And he has a good cast around him.

“Rooks has improved so much over his high school career. He’s better offensively than N’diaye. He doesn’t block as many shots, but he alters just as many. That’s a stat you don’t keep track of. Rooks has good feet, good post moves, and he’s a good passer. I’d love to coach either one because both have really bright futures.”

“There isn’t a coach in the county who wouldn’t take either player. Who you take depends on what your team needs.