Temescal Canyon its chances in overtime, but can't convert any of them into goals. 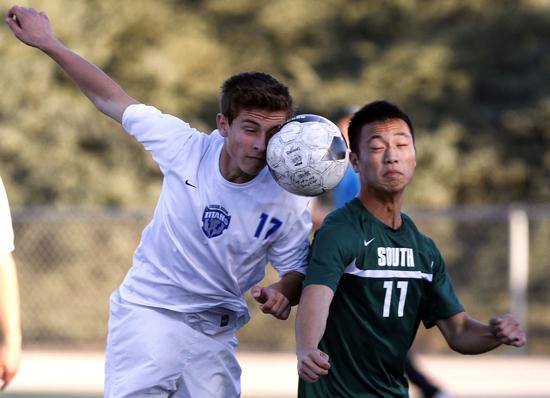 Unseeded South Torrance scored in the final minute of the second overtime to complete a 2-1 come-from-behind victory over Temescal Canyon in the CIF Southern Section Division IV semifinals.

The Spartans’ victory marked their third consecutive overtime win in this postseason.

For a youth laden Titan side, one that saw no more than a single senior on the pitch at any time Friday, thoughts turned immediately to the future.

“We had a great season, but now it’s all about how we handle this loss,” Temescal Canyon head coach Mason Dool said. “We have to look ahead and move forward. Now is the time to focus and concentrate on the offseason.

Temescal Canyon (18-7-3) started the game just as it did in its quarterfinal match by scoring on its first attempt to take an early lead.

In the first minute, Jordan Zamora struck a nearly perfect corner kick that found the head of a charging Matt Marquardt, who pushed the ball into the net.

Gaining the quick advantage gave a boost to the Titans’ confidence but perhaps slowed their offensive ambition.

“It was kind of good of bad in a sense,” Dool said. “We reverted back to what we did in our quarterfinal game, which was sit back on our heals after we scored an early goal.”

Added Marquardt: “I think maybe we got a little bit too relaxed; we just couldn’t manage to put another one in.”

South Torrance (14-7-6) was able to level the game in the 38th minute when Richie Lee crossed a free kick from 25 yards out and into the box and had it flicked in by Ryosuke Inaba.

Inaba found the back of the net for a second time in the 100th minute with a nearly perfect strike directly in front of the net to punch his team’s ticket to the championship match.

The game-ending goal came seconds after the Titans peppered the net in the second overtime, nearly finishing the game on their own terms by rattling off four shots, two of which forced saves by the keeper.

“That’s really what we failed to do in the first half,” Dool said. “After we got that early goal from (Marquardt), we seemed to go into defense mode, and we told the kids at halftime that we couldn’t do that.

“That conservative type of play wasn’t going to cut it.”

Marquardt, though dissapointed with the result, remained positive about the prospect of next season.

“We like our chances,” Marquardt said. “we are going to be comfortable playing with each other and be able to use this experience.”