Despite injury, offensive standout Ryan Blasena comes through for Mavericks. 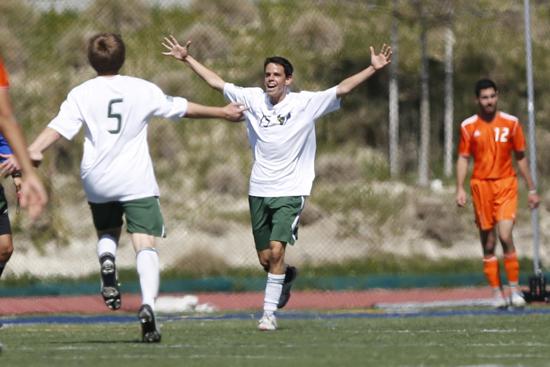 Nonetheless, that didn’t stop Blasena from putting his best foot forward against Valhalla on Saturday as he scored one goal and set up another to spark the sixth-seeded Mavericks in a 2-0 victory for a repeat title at Del Norte High.

“Yeah, there was a lot of pain,” said Blasena, left with a purple toenail as result of the injury. “But there were 80 minutes to play, and it couldn’t get worse than it already was, so I played through it. Now, this is huge, back-to-back championships.”

Blasena, a senior, first converted on an off-balance crossing shot from the right corner 19 minutes into the second half.

Yariv Ashkenazy doubled the lead for LCC (19-6-2) by scoring on a rebound off a shot by Blasena 15 minutes later.

“It’s a team effort, and we pulled it off,” senior defender Drew Ramsey said. “It felt weird last year winning it as a junior. It was cool, but this year, it feels like it’s ours as a senior. It’s a great feeling.”

The LCC defense remained solid despite losing junior Connor Hedges in the regular-season finale with a broken fibula. He rooted for his team from the bench while attired in his game jersey.

“Even though I wasn’t out there, I still felt part of the team,” Hedges said. “Everyone was saying that they’ll get it for me, and we did it.”

This was the second straight shutout by the Mavericks, who allowed only two goals in four playoff outings.