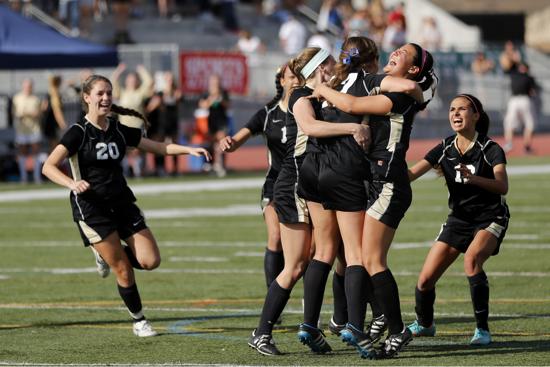 Sophomore Haley Bruce stepped right up for Westview late in the San Diego Section Division II girls soccer final to take a penalty kick in regulation play for the first time in her varsity career.

Bruce coolly converted with two minutes left to lift the second-seeded Wolverines past defending champion La Costa Canyon 1-0 in the third straight championship contest between the schools on Saturday at Del Norte High.

“I just went there confident and tried to place it, and it went in,” said Bruce, who was given the opportunity because of a hot spell in practice. “We had to come together as a team and work hard the entire game. It’s really exciting to win.”

Along with avenging last year’s finals loss, Westview (19-6-2) claimed its sixth title since 2005 by blanking top-seeded LCC (18-5-3) for its third shutout in as many playoff games.

“It’s amazing,” Wolverines senior defender Meagan Harbison said. “Since losing to them last year, we really wanted to come back and beat them. We were really pushing it.”

Following Bruce’s goal, the Wolverines’ Andrea Leano made her sixth save to secure the victory. At the outset of the second half, she made two key stops in rapid fashion.

“I couldn’t be more proud of our girls,” Westview coach Peter Stogsdill said. “There was talent, and more importantly, there was chemistry.”

The penalty shot was awarded as a result of a collision between onrushing Wolverines attacker Cassie Taniguchi and a defender. Bruce then sent the ball untouched into the net to break the scoreless duel.

Into the final, the Mavericks had scored nine goals in two postseason contests.