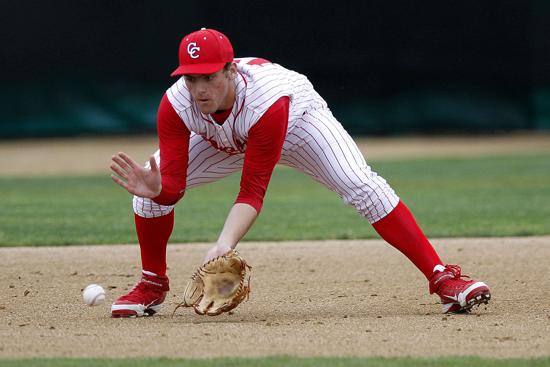 Cathedral Catholic senior Michael Martin is a standout for the Dons on the mound and at third base.

Never one to shy away from a challenge, Cathedral Catholic High baseball coach Gary Remiker has chosen to travel to North Carolina at the end of the month for the 16-team National High Invitational that features eight teams in Baseball America’s preseason Top 25.

“My goal at the end of the season is to finish as the No. 1 team in the nation,” Remiker said. “You might as well dream big.”

The Dons, who return all 30 of their pitching wins from last year, are ranked No. 1 in the nation by USA Today and Collegiate Baseball.

Perfect Game has the Dons No. 2 in the nation. Baseball America and MaxPreps have Cathedral Catholic No. 3.

Cal-Hi has the Dons ranked No. 1 in California, followed by Vista at No. 2. Rancho Bernardo is No. 8, giving San Diego its best national and state recognition.

But how do these national and state publications determine their rankings?

“I start with the final poll from the previous year,” said Kevin Askeland of MaxPreps. “I look at those teams that have a high number of returning players.

“Then I look for teams that reached the state finals and lost or fell short, but which also return a high number of players. The returning players don’t necessarily have to be MLB prospects, although it helps.

Lou Pavlovich of Collegiate Baseball uses much the same approach.

“We look at last year’s rankings, what schools have players on junior national teams,” Pavlovich said. “We try to get a consensus from the forms we send to colleges and high schools. We do a lot of leg work.

“In this case, Cathedral Catholic was a unanimous No. 1. We’ve been doing this since 1984, and we’ve never had a San Diego team ranked No. 1.

“I’ll be honest, the high school poll is a nightmare to compile, a pain in the neck, very difficult. It’s really an educated guess.”

“Ours is a true poll,” said Nathan Rode of Baseball America. “We divide the country into eight regions and each has a district representative. They’re all coaches or former coaches who are involved in the game. And there are four at-large reps for a total of 12 voters.

“We have a network and feed those people information. Every other Sunday, we have a conference call and exchange information. The reps rank the teams in their region.

“After the call, they submit their rankings. Right or wrong, the polls create discussion and interest in high school baseball.”

Vista coach Rick Lepire was part of Baseball America’s voting committee for two years. He said it was one of the best and worst experiences of his career.

“At first, I really enjoyed voting,” Lepire said. “Baseball America does a great job getting you information. But it was a lot of pressure.

“Somehow people found out I was a voter, so I was getting calls and emails from all over the country. Most were civilized. Some weren’t. That was a problem for me.”

Rancho Bernardo was ranked No. 1 in the nation in some polls at the start of the 1999 season.

“We’ve been ranked pretty high over the years and while we don’t do anything different, being ranked does put pressure on a team.

“Whether I have a ranked team or a rank team, our approach is the same. We try to have our own goals. We don’t try to live up to the expectations of others. We focus on our team.

“Everybody deals with this kind of thing differently. I tell my team to prepare like a winner, act like a winner and not get wrapped up in the expectations of others.