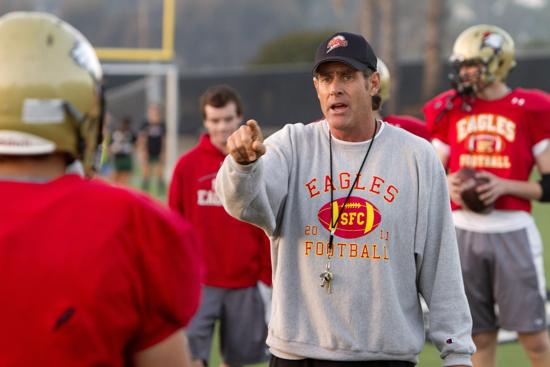 Nick Ruscetta, who led Santa Fe Christian to a San Diego Section Division V championship and a spot in a state bowl game in 2012, has stepped down after four years as head football coach at the school.

Ruscetta has been replaced by Jon Wallace, an assistant coach at SFC since 2004.

“Nick’s father is ill, and he wants to help his brother (Dave), who has been the primary caregiver,” SFC Athletic Director Tim Seitz said. “He did an outstanding job, but we believe John will do a good job, too.

“Jon is an on-campus guy, and that was very important to us. He was a varsity assistant (working mainly with the defense), but he was also the head JV coach. So he’s very familiar with our players.”

Ruscetta, who took over at SFC when Brian Sipe left to join the staff at San Diego State, was 39-13 in four seasons with the Eagles.

“I’m thrilled to have the opportunity to carry on what Brian and Nick started,” Wallace said. “We have great kids here and the program won’t change.”

“Jason has a good football background and plenty of energy,” La Jolla AD Bob Allen said of the 30-year-old Carter. “Jason is an off-campus guy, but we feel we have found the right guy to lead our program.”

Carter, a quarterback and receiver at Texas A&M, played two seasons in the NFL, one with Minnesota, another with Carolina. He tore his ACL in 2008 but bounced back to play for the Toronto Argonauts of the CFL in 2009.

A clinic for coaches and athletic directors is planned for 9 a.m. to 3 p.m. April 13 at Scripps Ranch High.

The 20th annual Caver-Cardinal Golf Classic will be May 6 at the Admiral Baker Golf Course. Money raised at the golf tournament and accompanying dinner and auction will benefit the foundations of San Diego High and Hoover High. Last year, each school received $9,300. Entries and sponsorships are sought. For information, contact Penny Guarnotta at (619) 440-7255 or Ed Ott at (619) 670-0694.