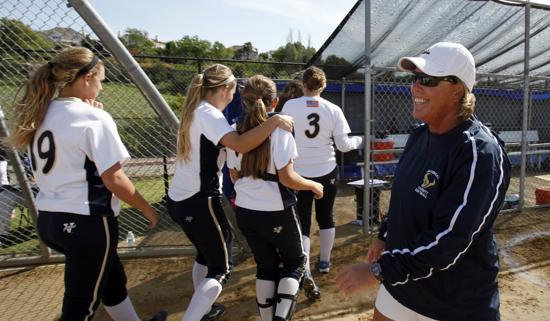 Veteran Mary Jo Griswold, who is in her first season at La Costa Canyon, says she's "passionate about coaching softball."

She had read the newspaper accounts. And she had shared an elevator with the San Diego State baseball coach and Padres Hall of Famer.

When Mary Jo Griswold looked up on the wall inside the treatment room at UCSD’s Moores Cancer Center and spotted an immobilization mask with a plastic impression of his face, she realized she shared something else with Tony Gwynn. Both were undergoing radiation for a rare cancer of the parotid gland.

It wasn’t the first battle with cancer for Griswold, a veteran softball coach who’s in her first season at La Costa Canyon High.

An enlarged lymph node was discovered in Griswold’s neck before the 2010 season at Scripps Ranch, where she had spent eight years as varsity coach. Initially, doctors thought it was a recurrence of a 1999 bout with thyroid cancer, for which she had surgery and was treated with radioactive iodine. By season’s end, Griswold still had not received a diagnosis. She decided to take some time off, figure out what was going on and get healthy.

“Which was really difficult because I had seven juniors on that team,” she said. “I had a strong core coming back for their senior year and we were a really good team. It was a done decision even before I knew what was wrong. I just knew in my heart that something was wrong.”

Griswold had surgery in August 2010 to remove the lymph node. Like Gwynn, she had the parotid, a salivary gland, removed the following month and then underwent eight weeks of radiation and chemotherapy. Despite the tumor being intertwined with her facial nerve, the nerve was not affected.

Griswold thought about telling Gwynn she was a softball coach but decided against it.

“I figured we were both kind of sick,” she said. “But it was interesting to me that we were both going through it. When you get that kind of cancer it’s so rare you’re told, and I thought ‘Wow, he’s got it and I got it.’?”

Griswold took 2011 off to recover. She was surprised Gwynn was able to return to coaching last year.

“I was pretty amazed by that because I was pretty tired,” she said. “Radiation every day is debilitating. Between that and the chemo it’s just exhausting.”

Griswold said she began to feel pretty good by last July and decided she was ready to get back in the dugout. Instead of returning to Scripps Ranch, she sought an opening at a school with a dedicated softball field rather than a joint-use facility.

“I was looking for a place where I didn’t have to fight the battle where you’re sharing the field with the men’s league at night,” she said.

When Mike Hill stepped down after 19 years at LCC, Griswold jumped at the opportunity.

“It was an opening that typically doesn’t come up,” she said.

Former LCC Athletic Director John Labeta, who knew Griswold from when they worked together at Serra, hired her before he left for the CIF’s San Diego office and his daughter Kari DiGiulio took over for him.

DiGiulio said she found out about Griswold’s health at a field hockey tournament in September 2010. Griswold was there to watch daughter Kori play for Cathedral Catholic. Like her two older sisters, Kori has committed to play field hockey for Cal.

“Really, my jaw dropped because I had no idea,” DiGiulio said. “I just sat next to her and we just kind of talked.”

DiGiulio has had a close-up view of Griswold’s recovery.

“It’s phenomenal,” DiGiulio said. “You wouldn’t even know. That’s what makes her so admirable, such a pillar of strength for her children, for other women around her and just to be back out on the softball field, doing what she loves.”

Griswold is accustomed to success, leading Scripps Ranch to league titles her final three years. LCC hasn’t won a league championship in a decade, but Griswold said she loves the challenge of a new team. Besides being new, her team is young, with six freshmen on the varsity.

“My goal is to try to build the program to be league champions consistently, and eventually try to win a CIF championship,” Griswold said. “I think the community has the ability to do that.”

After opening the season with a 2-1 win over Cathedral Catholic, the Mavericks lost their next six games and were shut out in five of them. On Saturday, their bats came alive in a 12-2 rout of Poway. LCC followed that with an 11-1 win Tuesday against Mission Hills.

“It’s kind of getting that mentality that that’s where we want to go, but you’re going to have to build the program,” she said. “It’s very invigorating. I have renewed energy because I’m just passionate about coaching softball. I absolutely love it.”