Hannah Akamine and Kayla Wartner are a strong 1-2 punch at catcher and infield for the Escondido High softball team. 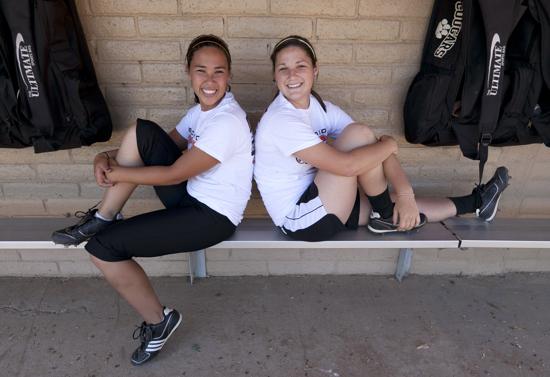 ESCONDIDO — Long before they shared the catching position for the Escondido High softball team, Hannah Akamine and Kayla Wartner were 8-year-old rivals for their 10-and-under teams.

As teammates, the two catchers can’t play the same position at the same time. When Akamine is catching, Wartner plays first base. When Wartner is catching, Akamine usually plays third base. Coach Cary Weiler decides who catches based on the strengths of the opposing team’s hitters.

“I feel like I have the two best catchers in the county,” Weiler said.

Weiler backs that up by pointing out where the two are going to college. Akamine, a four-year starter, is headed to Tennessee, while Wartner, a three-year starter, will play at Hawaii.

Akamine has been around a softball field for as long as she can remember. Her sister, Sarah, 5 years older, earned a scholarship to Arizona. Another sister, Lisa, 3 years older, got a full ride to Penn State. It was only natural that she follow them.

“I was always pestering them, ‘Come teach me. I want to learn,’” said Akamine, who missed most of last season with a bulging back disc. “It was best they were ahead of me, because I learned a lot from them.”

But Sarah and Lisa have something that Hannah lacks.

“I’m the only Akamine who doesn’t have a CIF ring,” said Hannah, who was batting .417 with five homers and 29 RBI to go along with four doubles and two triples entering Friday’s regular-season finale.

Akamine might have a transition to the Tennessee drawl and the music in a state where country is king. She’s the vocalist for the school’s jazz band. But she won’t have a transition in colors after wearing Escondido’s orange. She will miss the Cougars tradition.

“I grew up here at this field, came to practices with my sisters,” Akamine said. “It’s like my home. And Coach Cary is amazing. He teaches us so much.”

Wartner got her start playing T-ball with the boys when she was 4.

“I was the one in the outfield picking dandelions,” Wartner said. “They had to yell at me to pay attention. But I always liked to hit.”

A bit of a tomboy, Wartner has suffered some pretty serious injuries. She dislocated her left elbow playing on the monkey bars. She broke her left arm twice, once after getting pushed off some bleachers, and a year later falling off a scooter.

To Wartner, her choice of Hawaii was easy.

“When I went there, I went with the mind-set to see the school and take a look at the program,” Wartner said. “But it being in Hawaii was a big factor.”

She wants to get on the field right away and hopefully at catcher.

“I like being in charge of the field and having people listen to me when I’m out there,” Wartner said. “I’m not the center of attention – the pitcher is – but I like being involved in every play.”

The Cougars are 15-8 this season, with a shot to go deep in the section Division I playoffs if everyone’s performing at their peak.

“The other kids are better players because they’ve played with (Akamine and Wartner),” Weiler said. “They both demand the excellence it takes at this level. It uplifts and makes everyone better.

“They both hit a ton and they’re both quality players. They might not catch next year in college, but I’m sure with their hitting abilities they’ll be playing somewhere.”