Great Oak looks to live up to the hype; lighter schedule for Southwestern League could prove more intense. 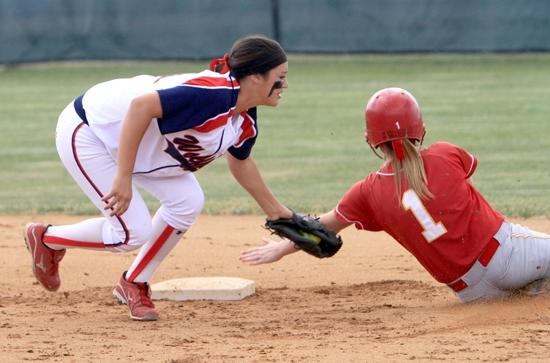 Senior shortstop Mo Mercado (left) is one of the key pieces that is taking Great Oak softball to new heights this year. Mercado hit a team-high .477 in 2012.

The Wolfpack are still seeking their first-ever Southwestern League championship, but they have been receiving the accolades typically bestowed upon an established power.

Great Oak was ranked No. 1 in the CIF Southern Section Division I poll, released March 18. The Pack also have garnered national recognition as they were ranked No. 15 in the country in MaxPreps’ Top 25 poll unveiled March 12.

“They’re the team to beat,” Broncos coach Dan Torres said. “Great Oak has got everything.”

The Wolfpack lived up to the early acclaim by outscoring opponents 43-13 during a nine-game winning streak to start the season. Their only blemish is an 8-0 loss to top-ranked Division II school Mission Viejo.

“There’s no question to be in the same conversation with Mission Viejo, (Huntington Beach) Edison, (Garden Grove) Pacifica, Norco, to be the same breath with them is definitely an honor,” Great Oak coach David Mercado said. “I don’t think I can quite put us there yet.”

Mercado says the elusive league title is a reachable goal for a squad that is brimming with college-bound talent such as his daughter, Mo Mercado.

Mercado, committed to Arizona, swings a potent bat as she ranked third in the Southwestern League last year with a 1.163 OPS (on-base percentage plus slugging percentage). At shortstop, the senior is the cornerstone of a stellar defensive unit.

The Wolfpack don’t possess a lot of power outside of Mercado and third baseman Savanna Ferstle so situational hitting, bunting and taking chances on the base paths are the foundation of the team’s offense. Leadoff hitter Laura Curry and No. 2 batter Ander Lopez are the table setters for Great Oak’s small-ball attack.

2. Fewer games should lead to more intense contests in the Southwestern League.

The Southwestern League schedule has been trimmed from 15 games to 10. The rationale for the move is that league coaches believed tournament games and nonleague contests were gathering more weight in playoff seeding.

With the reduced docket, the games are bound to be fervid affairs and the likelihood of a co-champion or an upset title holder increases. Four of Great Oak’s foes also are littered with college commitments.

Vista Murrieta will have trouble replacing the power output of Michigan freshman phenom Sierra Romero, who set the county record with 45 career homers. Although the Broncos (3-3) are still finding their way in the early going, they are loaded with talent from their seniors down to freshmen.

Romero’s younger sister Sydney registered the second-best on-base percentage (.542) in the league as a freshman in 2012. Sydney is supported in the lineup by center fielder Katie Datil, who finished third in the league with a .679 slugging percentage last year.

Freshman catcher Tristen Edwards has the bloodlines as her older twin sisters Taylor and Tatum once starred for the Broncos and now are juniors with University of Nebraska. Edwards, who already has given a verbal commitment to Nebraska, is batting .500 in her first six games.

But it’s junior ace Selina Ta’amilo who gives the Broncos an opportunity to win any game. The dominant hurler went 20-3 with a 1.11 ERA last season, but has not been at peak form yet after suffering a foot injury in the offseason.

Murrieta Valley has only four players that are junior status and above, but its core is extremely gifted despite its youth. The Nighthawks are led by a starting pitching tandem of Lacey Alderman (Long Beach St.) and Olivia Sanchez (BYU) that will be throwing at the Division I level within time.

Shortstop Stephanie Moreno is a leader of a burgeoning starting nine that prides themselves on their athleticism.

Chaparral has an intriguing team that employs three Division-I quality catchers in Jaelyn Young (Purdue), Cheyenne Balzer (North Carolina State) and Lorena Ruiz (Hawaii). The Pumas’ calling card is their hitting, which is spearheaded by Young and her sophomore sister, Mariah, a first-team all-Southwestern League selection in her first season.

Murrieta Mesa has made gains this season with their offense and is only one win away from matching last year’s victory total of five. Their best player is sophomore Alexis Watts, a slap-hitting base stealer.

3. Heritage is poised for a great season in the Sunbelt League.

The Patriots already have taken the first league matchup against their Paloma Valley adversaries and are assembling respect with a No. 9 ranking in the Division IV poll.

The most daunting obstacle for Sunbelt League opponents is overcoming Blevins on the mound. The 6-foot junior has compiled a 0.91 ERA in her first nine starts this season.

Backing Blevins is an offense that usually churns out just enough runs to get over the hump. Chilson provides the power while Thewes serves as the speedy slap hitter.

Paloma Valley ace Kailee Smith is the only returner among four all-league selections last year. The Drake verbal commitment was 13-2 with a 1.10 ERA last season.

With new blood playing key roles, Wildcats coach Briana Wells says her team is still developing, but views plate discipline as one of the team’s strengths. Sophomore Karynne Johnston has blossomed into one of Paloma’s more reliable bats.

Temescal Canyon figures to compete for one of the top three spots in the Sunbelt League after finishing 9-6 last season. The Titans bring back an experienced trio with catcher Kacey Everett, second baseman Maegan Rowley and pitcher Myranda Libano. Freshman Emma Bordenkecher is a budding star.

Lakeside has been carried by two senior bats — catcher Austen Urness (.579, 4 HR) and outfielder Alyssa Loyless (.550, 2 HR) — this year. Urness verbally committed to Nebraska as an eighth-grader and Loyless will study at Dartmouth in the fall.

“Urness and Loyless are two of the greatest kids I have ever been around in my life.” Lakeside coach Todd Naylor said.

The Lancers are laboring at 2-5 after losing league MVP Jasmine Smithson-Willett on the mound. Freshman Cheyenne Alvarez has pitched every inning for Lakeside this season.

However, the postseason road should be more menacing after Hemet was bumped up to Division IV. The Bulldogs are not currently ranked in the poll.

Gandara, Hernandez and Miller have been playing together on varsity since they were freshmen, so coach Jeff Galloway believes his squad has an on-field chemistry that is matched by few.

5. Calvary Murrieta is shooting for its third-straight second-place finish in the Ambassador League.

The Warriors have had the misfortune of playing in the same league with Aquinas, a juggernaut that has outscored its opponents by a 61-2 margin this year.

Still, Calvary Murrieta has managed to go 25-7 since entering the Ambassador League in 2011, which is a remarkable achievement considering the small size of the student body.

Senior Chelsie Keller doubles as the team’s best hitter and go-to pitcher. Armed with a strong infield, the Warriors hope to record their first postseason win since 2010 this year.

Calvary’s Ambassador League rival Linfield Christian is going through a rebuilding year as they have only one player Carlyn Barker that plays travel softball.