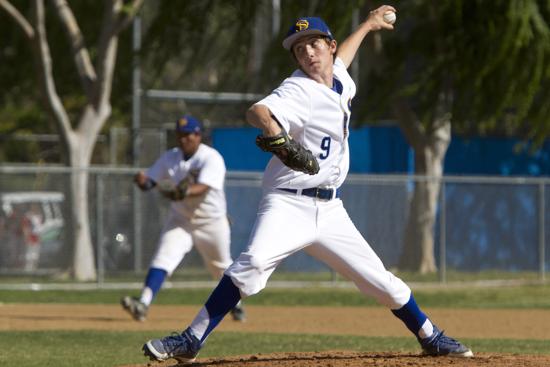 And Coronado couldn’t push the junior off as San Pasqual scored two runs in the first inning, two more in the third and hung on for a 4-2 win Tuesday in a 6A Division game in the 63rd annual Lions Baseball Tournament.

“We had chances, had him on the ropes and let him off the hook,” Coronado coach Sam Ceci said after his team saw a four-game winning streak come to an end.

“We hit some balls hard, but their kid settled in, and we couldn’t break through.”

The Islanders (5-5) scored a run in the first but left the bases loaded when Hartvigsen got a popup and fly ball to end the inning.

Coronado had a runner thrown out at the plate in the fourth, but still had the bases loaded with two outs when Hartvigsen got a fly ball to end the threat.

The Islanders scored a run and had runners on first and second in the seventh against a reliever when San Pasqual coach Tony Colantono summoned Hayden Wright from the bullpen. Wright got a strikeout and popup to end the game.

“I didn’t have my best stuff, but I was able to make some adjustments,” Hartvigsen said. “I was able to locate some pitches and get out of some jams.”

Coronado had just five hits, but left 10 runners on base, seven of those in scoring position.

“Our little left-hander was tough,” Colantono said of the 5-foot-9 Hartvigsen. “He’s not big in stature, but he has a big heart. He has given us all we’ve asked for, been the big gun in our rotation.”

David Gutierrez led the way with three hits, including his second home run of the season, and two RBIs. Justin Vogt, Jo Jo Escarcega, Zack Zevenbergen and Clay Morgan all had two hits for the Eagles.

“I wish we had gotten a little more production, but we hit the ball pretty well,” Colantono said. “We let a good team hang in, and it almost cost us. It got a little hairy there at the end.”

Coronado and San Pasqual are both 1-1 in pool play and have a chance to advance to Thursday’s semifinals, depending on today’s results.

“We need help to advance, but anything can happen in tournament play,” Colantono said. “Our goal right now is to go 2-1, take care of our business, and see what happens.”