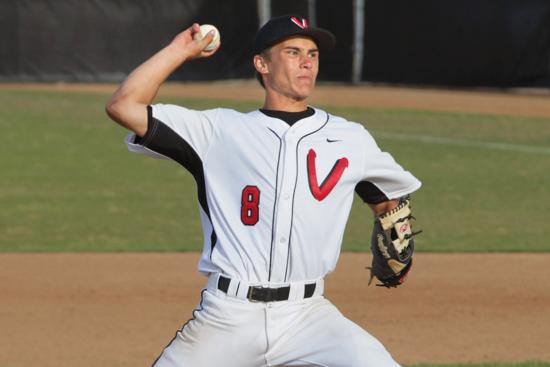 “I asked if he ever dreamed about pitching in a game like this,” Lepire said. “He said ‘yes.’

“So I asked him if he was pitching in a CIF championship game or a tournament championship.

“And he said ‘a tournament.’

“So I gave him the ball and told him to live his dream.”

And he did exactly that.

In his first start of the season, Veyveris hurled a complete-game six-hitter. Veyveris, who had pitched just 3?1/3 innings since March 9, didn’t walk a batter and struck out three in beating Madison 4-3 to give Vista the title at Cal State San Marcos.

“The way the week was going, I looked ahead and kind of figured this would be my game,” said Veyveris, who is the fourth starter in a rotation that includes Brett Seeburger, Billy Roth and Austin Ott — a combined 26-3 last season.

“So when Coach gave me the ball, I wasn’t surprised.

“My curve was working pretty well, so I was able to keep Madison off balance.

“Toward the end, my adrenaline was pumping and I was pretty excited. This was a lot of fun.”

Vista (9-4), which has won eight of its last nine games after a 1-3 start, jumped to a 3-0 lead after two innings with Roth, Brody Roberts and Nick Byrd driving in runs.

But Madison (7-5) rallied for three runs in the fourth to tie the game with Jacob Vermillion, Sean Dalton and Carson Hermosillo supplying RBI hits.

Vista scored the game-winner in the sixth when Ott singled and went to third on an outfield error, then scored on Josh Cuppett’s bad-hop single.

Veyveris set the Warhawks down in order in the seventh, retiring 11 of the last 12 hitters he faced.

“We just went toe to toe with one of the best teams in the county,” said Madison coach Robert Lovato. “We hung with the best.

“We made a crucial error, but that happens in baseball. We’re young (starting freshman Ryan Hartin at second base and freshman Andrew Shebloski in right field).

“And our lower-level programs are solid. So the future is bright.

“We’re a Division II team, and we hung with some of the best Division I programs in the county in this tournament.

“I played for Ernie Beck at Clairemont and still use the things he taught me and the lessons I learned.

“I try and have my teams play the way Ernie Beck teams played.

“So I’m really proud of this team, proud of what we accomplished this week and look very much forward to the rest of the season.”

In Thursday’s semifinals, Roth threw a complete-game three-hitter as Vista beat Rancho Bernardo 6-1. More than 30 pro scouts were in attendance as the Arizona-bound Roth hit 92 mph on the radar guns.

Madison outlasted Carlsbad 8-6 in its semifinal with Andy Villasenor knocking in the winning run in the sixth inning to break a 6-6 tie.