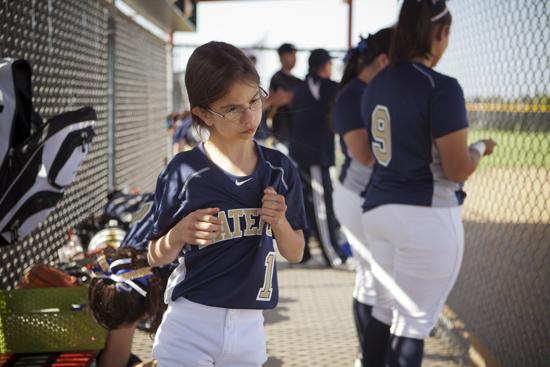 Carli hangs out with the girls in the dugout during games dressed in a full uniform. CRISSY PASCUAL

CHULA VISTA — In its recent game against Rialto in the Duds for Dudes Tournament, the Mater Dei Catholic softball team was in trouble.

Uncharacteristic errors and mental mistakes squandered the three-time CIF champions’ early lead. The Crusaders were coming up for their last at bat, trailing 4-2.

Sure it was a tough situation, but there’s a young lady on the Crusaders bench who has experienced, and overcome, far more difficult situations.

Carli is an “adopted” teammate. Mater Dei Coach Mike Centrullo wanted his team to experience something more than winning another CIF title or worry about surrendering an early lead. He wanted to help others.

He went to Children’s Hospital and the Make-A-Wish Society to see if they could recommend a child they could adopt. Privacy issues stood in the way.

But then the answer miraculously came to him.

Carli’s 13-year-old sister, Sydney, and her parents, Maria and Don, from El Cajon were interviewing at Mater Dei with hopes Sydney could attend the school next year and play softball. The topic turned to the program Centrullo was starting.

“As I was talking about what I wanted to do, I could see Maria getting choked up and I didn’t know why,” Centrullo said. “The next day she called and told me about Carli’s situation. I immediately knew we had our girl.”

Even before she was born, Carli and her family were in a battle for her life. An ultrasound had the doctors recommending an abortion because of severe heart issues. Maria couldn’t do it and on March 8, 2002, Carli was born; a team of surgeons was ready to go in the Children’s Hospital delivery room.

The diagnosis was wrong, and Carli didn’t need immediate surgery, but she did have 12 abnormalities from her head to her toes.

“She’s had five heart surgeries, three stomach, three eye and even one on her nose,” Maria said. “She’s been on life support seven times and twice we were told not to expect to see her the next day.”

If that wasn’t enough, when she was on a ventilator recovering from one heart surgery, the hospital notified them the insurance company wasn’t paying their bills and went bankrupt. The family liquidated its life savings; it threatened their manufacturing business.

Their plight against the insurance company made national news. They traveled to New York to be on “Primetime” with Diane Sawyer.

Even worse, Maria was diagnosed with breast cancer in 2011, but says she is doing fine.

Nobody deserved “14 angels” more than Carli, a Make-A-Wish child. With the team, she got them.

“At first it was scary, I thought I was going to have to go away from my family,” Carli said about hearing of her “adoption.”

“I love having her in our dugout,” said senior captain Taylor Cruse. “Even if I have a bad at bat and strike out, when I get back to the dugout, I look forward to my high-five.”

Over the holidays the team went to Carli’s house for dinner and toured neighborhoods looking at the lights. For her birthday they went to the movies to see “Oz: The Great and Powerful.”

“We go to a nice school and have things easy, but she reminds us what it is all about,” Cruse said.

By the way, in that last at bat against Rialto, the first two hitters reached base. Cruse stepped up and laced a liner over the left field fence to give the Crusaders a dramatic 5-4 win.