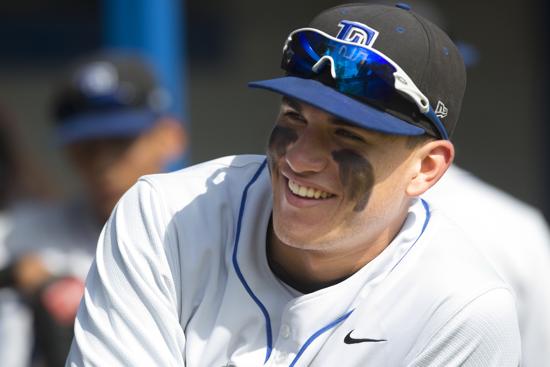 Luke Ramirez plays for Eastlake High, almost four years after he and other members of the Park View Little League team won the World Series.

CHULA VISTA — Devin Kopas was a sophomore at Eastlake High and he remembers how he and his varsity teammates kidded the giant freshman who had played on a bigger stage than any of them.

“We joked around but he knew we were just messing with him,” said the University of Portland-bound catcher looking back two years ago when Luke Ramirez, who helped lead Park View Little League to the 2009 World Series title, came out for baseball.

“The truth is all of us were a little bit jealous. We called him Big Luke because he was an amazing target at first base. But he was so humble.”

Luke Ramirez was the 6-foot-2, 200-pound pitcher-first baseman who towered above his Little League teammates and hit tape-measure home runs.

Now he’s a junior at Eastlake, 6-foot-3 and still 200 pounds who is batting fifth in the lineup, hitting .342 for the Titans (10-4). He has committed one error all season and no longer hears catcalls like “you’re not in Williamsport any longer” or “these fences aren’t 200 feet.”

No, if he does hear a comment it’s positive about the accomplishment that riveted the country and brought he and his teammates momentary fame and more than a little pressure to somehow remain bigger than life.

That was impossible, especially when the accolades, visits to see the President and late night talk show appearances slowed and he realized the strong right arm that catapulted balls estimated at 105 mph if thrown from a regulation mound, was in pain.

“I took eight months off because I had put more stress on my arm than I thought,” said Ramirez who plays mostly first base and just this year returned to the mound, discovered his mechanics were off and shut it down, planning to return to the hill in 2014.

But it wasn’t his pitching that was affected most when he moved to a regulation-sized field.

“In Little League, with the short fences, you could actually only get part of the ball and still hit it out, so you develop a Little League swing, cutting under the ball,” he explained. “In high school and beyond, that’s just an easy fly out, so Little League does its players no favor having short fences. They should move them back.”

As a freshman he played junior varsity ball so he could get more at-bats, according to Titans varsity coach David Gallegos, and ended up breaking his hand. Last year he made the varsity and six games into the season, dislocated his elbow.

Now, in addition to playing on the Eastlake basketball team, he is back on the diamond, enjoying every minute, hoping to get a college scholarship (he has a 3.7 GPA) and, with a little luck, have a chance to play in the Major Leagues.

He started the year with a goal of six home runs and a .350 to .400 batting average and while he hasn’t hit a homer, he says two-thirds of the season remain and he feels his swing coming around.

Gallegos says Ramirez could easily be hitting .500 because an unusual number of sizzling line drives have been hit right at infielders or hauled down on the warning track.

“The thing is I wondered for a while if I still had a passion for the game, and I do,” he said.

Ramirez admits he doesn’t dwell on the past, watching the World Series title game 6-3 victory over Taiwan in front of 32,000 fans in Williamsport. But he has seen a monster 400-foot homer he hit in San Bernardino more than once.

“It’s on YouTube and it really is amazing,” he says, laughing.