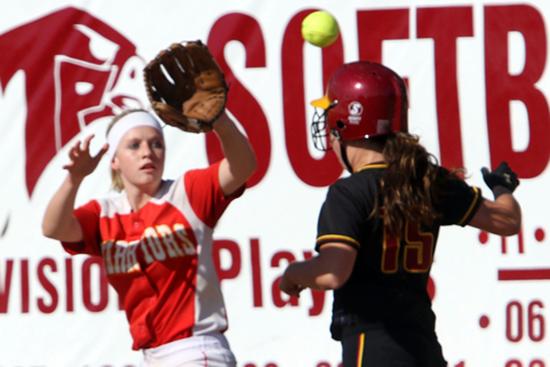 The Fallbrook High softball team was all smiles and high-fives on Tuesday. The Warriors, ranked 10th in the San Diego Section, were on an extraordinary high after a heated 4-3 league win over Carlsbad.

The euphoria came to a traumatic halt over the next 24 hours when a Fallbrook player, April Mattson, was involved in a serious car accident after the game.

Twelve hours after she was reported missing by her family, Mattson was discovered Wednesday morning near her car at the bottom of a 50-foot embankment in Fallbrook.

The second baseman, still wearing her softball uniform, was taken by helicopter to Palomar Medical Center, where she is recovering from undisclosed injuries that are not considered life-threatening.

Shocked and devastated, Mattson’s Fallbrook teammates rushed to the hospital, where they prayed together and made cards for the senior who has been an important part of the team’s success.

Fallbrook’s game at Vista on Thursday was postponed because the girls wanted to be there for Mattson.

The Warriors say the accident isn’t about to rattle the team.

“I feel we have something to fight for now,” sophomore starting pitcher Brooke Koran said on the phone from the hospital while visiting Mattson.

Fallbrook, which is 13-4-1 overall and 2-0 in the Avocado West League, is scheduled to play at La Costa Canyon today at 11 a.m.

Tuesday’s accident has drawn the girls closer on a team that was already tightknit after playing together for nearly 10 years on youth and school squads.

Added junior shortstop Hailey Drew, “It’s incredible to play with the same girls for so long and move up in competition.”

Co-head coaches Shannon Koran and Patti Drew, who played for Fallbrook, began a youth softball league in 2004 that brought most of the girls together for the first time. They wanted to create a league that would allow their daughters to begin playing the sport their mothers loved, having no idea they would be grooming the next generation of Warriors who would turn the team around.

“It’s incredible as far as we have come,” said Arena, who is batting .316 and is second on the team with 16 RBIs behind sophomore Dani DeVera’s 19.

The coaches’ daughters are among the team’s key contributors. Brooke Koran is the starting pitcher and has posted a 12-4 record. Hailey Drew has a .436 batting average and leads the team in runs scored at 23. Mattson has been a key player as well, batting a .327 with 14 runs scored and 14 RBIs.

The Warriors, with eight league games remaining, will now be playing for Mattson.

“We want to play like she’s with us,” Arena said.