Arbet feels right at home at The Diamond

Friday night probably won't be the last time Trae Arbet shows off his talents at a professional ballpark. 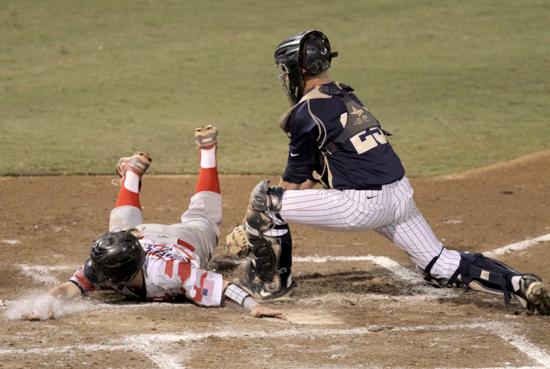 LAKE ELSINORE — It’s a dream come true for many Valley varsity baseball players. For some, it may be their last chance to play in a professional ballpark.

For others, like Great Oak shortstop Trae Arbet, it could be just the beginning.

Arbet had two hits, two runs scored and a run batted in, as the Wolfpack defeated Vista Murrieta, 6-3, during the nightcap of the Southwestern League triple-header Friday night before a total announced crowd of 5,155 at The Diamond.

Arbet, ranked as one of the top 100 high school prospects by Baseball America, showcased his wide range of athletic skills on Friday. He hammered an RBI double to right field in the third, and later scored, extending Great Oak’s lead to 4-0.

But Arbet really turned some heads on defense.

“I just like making plays, backing up my pitcher, getting him off the field as fast as I can so we can go hit,” said Arbet, who is projected to be selected between the third and fifth rounds of the Major League draft in June.

Of his many athletic talents, perhaps his most impressive tool is the throwing strength of his right arm.

“My throwing means everything,” said Arbet, who had five assists, making each difficult scoop and throw seem effortless. “I work on it everyday, using bands and playing long toss.”

Great Oak starting pitcher Orlando Meza also made himself at home on the big stage. The senior pitched 6 1/3 innings, scattering eight hits, while striking out four.

“It’s a great mound out here. They keep it in great shape,” said Meza, who has committed to San Diego State. “It felt good. I was hitting my spots, the defense was making plays and we were getting outs.”

The Broncos didn’t make enough routine plays to win the game. They committed five errors, including two in the second, leading to a pair of unearned runs.

“We just didn’t play defense,” said Bronco coach Matt Mosiello. “We need to get better defensively. This program was built on defense and pitching, and it still is. We just didn’t make plays.

“We’re trying, but we’re just not doing it.”

Trailing 6-1, the Broncos rallied for a pair of runs in the bottom of the seventh. Joven Afenir’s single brought in one run, and an outfield error allowed the second run to score.

But Eli Lingos got the final two outs to preserve the win.

Arbet hopes to return to The Diamond—or any other professional diamond—in the near future.

“I hope I have a lot more games like this,” Arbet said.