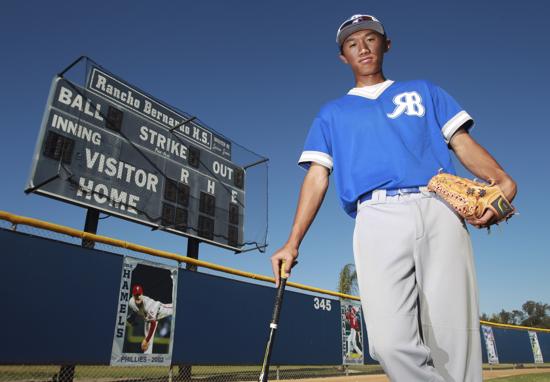 Rancho Bernardo senior Gosuke Katoh, who will attend UCLA, has a career average above .400 with the Broncos.

Gosuke Katoh arrived on the Rancho Bernardo High campus as an undersized, little-known freshman. He’ll leave as one of the school’s greatest baseball players.

Not bad for a youngster who didn’t speak a word of English when he arrived in San Diego.

Q: Give me your family history?

A: We’re from Tokyo. I was born in Northern California where my dad had a business, but we moved to San Diego in 2000 when my dad got a job with Sony.

Q: How did you get started in baseball?

A: I didn’t speak English, so my parents put me in Little League, thinking that would help me learn the language quicker.

Q: Where has baseball taken you?

A: I’ve been all over the country. I’ve played in the Metrodome in Minnesota. The people were so nice there. I’ve played in North Carolina, where it was hot at 8 a.m. and poured rain from 1-4 p.m. I’ve played in Georgia, Arizona at the big-league spring training sites, Las Vegas, all over California and in Petco Park.

Q: Your batting style reminds people of Ichiro. Is that intentional or natural.

A: It came naturally. My style is kind of a Japanese/American thing. I’ve taken the best parts of Ichiro and Robinson Cano and put them into my swing. Rick Ray, our hitting coach at RB, has worked with me on both styles.

Q: How about your fielding style? You’re fluid with a dash of flash.

A: It’s all instinct. I take at least 100 ground balls every day. I work on consistency, turning double plays and increasing my range.

Q: You’ve been at second base all four years at RB. Have you ever tried shortstop?

A: I was a shortstop until my freshman year at RB. But I didn’t have a great arm, and we had Andrew Daniel at short. Now Matt Jervis is at short. I like second base. I’m comfortable there.

Q: How much have you grown since your freshman year?

Q: How has the experience of playing at RB been?

A: It has been so positive. Coach (Sam) Blalock has made me a man. He has treated me so well, and I trust him. And I’ve made some great friends.

Q: Coach Blalock says you lead by example. Is being a leader something that fits you?

A: I’m not a vocal guy. Matt Jervis is our vocal leader. I will talk, but I choose to lead by hustling, taking control of a game, keeping the same demeanor if I’m hitless or have four hits, if I make three errors or turn three double plays. Running things out is something you can control.

Q: You seem to play the game with respect. Are you a student of the game?

A: A little bit. I learn something about the game every day. I try to respect my coaches and teammates.

Q: Do you watch a lot of baseball on TV?

A: I’m not a huge fan of any one team. I like to watch hitters like Bryce Harper and Mike Trout. I like the young, energetic guys.

Q: You’re headed to UCLA. How did you choose the Bruins?

A: UCLA has been my dream school since eighth grade. Both my parents went to UCLA.

Q: What other schools did you consider?

A: San Diego State, USD, UC Irvine, Arizona and Stanford were among my final choices.

A: Yes. People expect Asians to be smart. I’m OK in the classroom, But I have to work at it. I’ve learned that hard work pays off on the field and the classroom.

Q: The Major League Baseball draft is coming in June. Are you thinking about that?

A: It’s in the back of my mind. This is my senior year, so I’m trying to have fun, win a CIF championship. I try not to see the scouts in the stands, but I can’t deny it, I peek in the stands once in a while.

Least favorite ballpark played in: Valhalla High because the wind blows so hard

Type of bat used: Easton S2. It’s heavy, unloaded, and I can control the barrel

Type of glove used: Slugger. It’s only available in Japan

If you could play with any shortstop in history who would it be? Ozzie Smith

What would the rest of your dream infield be? Prince Fielder at first and Miguel Cabrera at third

Favorite baseball moment: My first at-bat in the CIF finals my freshman year. My heart was pounding. My knees were shaking. And I walked