No hits through four innings. No problem for the Lancers baseball team. 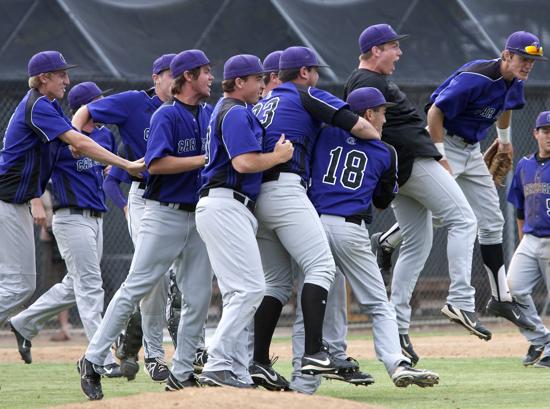 CARLSBAD — No hits through four innings. No problem for the Carlsbad High baseball team.

Averaging 2.2 runs over the season in the fifth inning, the Lancers scored six times in the fifth Wednesday and went on to beat La Costa Canyon 8-3 to clinch the Avocado West League championship.

Top-ranked Carlsbad improved to 23-4 overall and remains perfect in league play at 13-0. Eighth-ranked LCC, which had league-title hopes, fell to 19-9, 10-3 with two games left.

The league championship is the first for Carlsbad in baseball since 1993 when future major league All-Star Troy Glaus was the star of the show.

“The guys have a rabbit’s foot, and we have a lucky brick in the dugout, but the fifth inning is a mystical thing for us,” said Lancers coach Chris Greene. “It’s usually the third time through the order, and we change our approach if we need to. It has become our thing. We own the fifth.”

Held to just a walk through four innings by La Costa Canyon ace Carter Johnson, Carlsbad sent 12 players to the plate in the fifth, using two hits, a hit batter, four walks and an error on a potential double-play ball to score six times.

“We needed one clutch hit in that inning,” said Carlsbad DH Nick Anderson, who drove in two runs with a single to right. “I had already struck out twice, so I needed to do something.

“It has been 20 years since a Carlsbad team was a league champion, so it’s great to be a part of this.”

Slater Lee, who Anderson said “has carried us on his back all season,” was the starting pitcher for Carlsbad and improved to 10-0, allowing a pair of unearned runs over six innings.

“I was off and struggling at the beginning of the game,” said Lee, who’s headed to Cal Poly San Luis Obispo. “I was too hyped up, got caught up in the importance of the game.

“I have a lot of respect for Carter Johnson (who is headed to San Jose State). He’s really talented. So I had to keep us close until we could break it open in the fifth.”

Carlsbad, which is a Division I team for the San Diego Section playoffs, has won 14 games in a row.

“Our goal was to win this league,” Lee said. “Now we want to have a great run through the playoffs.”