Colts will play in a league more suited to their many challenges. 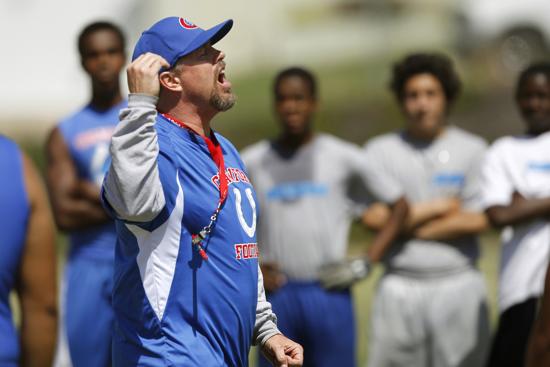 Here’s all you need to need to know about Crawford High football.

Late in a game last season, the Colts had a chance to win. All they had to do was complete a short, safe pass on a route that had been open all day.

“If we catch the ball, it’s a first down, and the game is over,” said Crawford Athletic Director Darcel Glover, an assistant coach on Michael Wright’s football staff. “The receiver takes off, but in the middle of the play, he stops to tie his shoe. The ball is thrown, it’s intercepted and taken back for a touchdown.

“Our kid simply didn’t know that you don’t stop to tie your shoe.”

Once an athletic powerhouse, Crawford has seen its demographics change dramatically at a school surrounded by the neighborhoods of City Heights and Rolando. The student body has evolved from mostly upper-middle-class white to 80-90 percent first-generation immigrants. Dozens of languages are spoken on campus.

As a result, the wheels have fallen off the program.

So why are people so optimistic about Crawford football?

“Because I think we’re on the right track,” said Wright, whose team opened spring drills Monday. “Last season, for the first time in a long time, we finished the season with both a varsity and JV team. We only had 40 kids, but we were able to field teams.

The Colts will start the 2013 season in a new league, moving from the City League to the Manzanita for football only.

Escondido Charter was 0-10 last season in the Coastal League and was outscored 470-176. Like Crawford, the White Tigers needed to get in a league where they could be competitive.

“I’m 100 percent on board with this,” said Bruce Ward, director of PE, health and athletics for the San Diego school district. “We have a lot of movement among the city leagues, but it’s unprecedented letting one of our teams play outside the area.

“I wouldn’t have been in favor of it, but I think with Michael Wright and Darcel Glover, Crawford is headed in the right direction. But they need a little help. They need to be in a league where they can compete.”

“How this came about restores my faith in what athletics is all about,” Ward said.

The process was two years in the making. Ward and officials at Crawford had to agree to make the move. The Manzanita League schools had to agree.

“This is a very positive thing,” Boshaw said. “The CIF’s focus is on trying to even things out. This move helps do that. The schools in the Manzanita League welcomed them with open arms.

“Football is the great unifier on campus. It’s a community binder. The fact Crawford should be more competitive should be a great boost to the school.”

Travel was one of the big concerns with the move.

Instead of 20-mile trips, the Colts will be driving 100 miles or more, across Interstate 8 to the desert schools — Holtville, Calipatria and Vincent Memorial. Mountain Empire is about 50 miles. Escondido Charter is about 35.

“I’m OK with the travel,” Wright said. “I’m all in on this, and the kids take their cue from me.

“We didn’t have a chance last season. We were beaten down.

“This move allows us to be competitive, allows us to build this program back. It allows the kids to enjoy themselves and gain some confidence.”

How Crawford has fared in football since the Colts' last winning season in 2004.