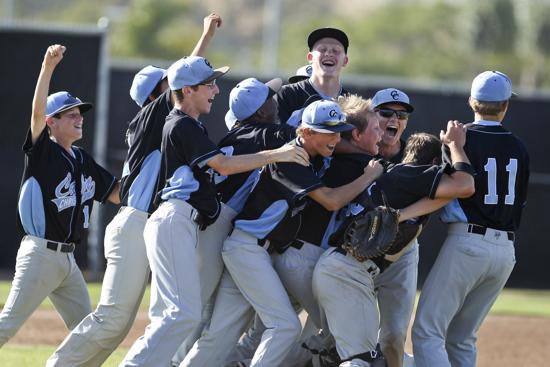 Before this spring, the Crusaders hadn’t had a winning season in nearly a decade, and they were coming off a miserable 2012 campaign during which they had won just two games. So when they applauded wildly Thursday with nearly every out they recorded and with each extra-base hit, it was as if they were exorcising the demons of all those teams that had come before them.

The fourth-seeded Crusaders captured the Division V title with an 8-0 victory over No. 3 Julian at Cal State San Marcos, stealing the momentum with a three-run first inning and then riding the pitching of senior Zach Katje and freshman Scott Roberts to the most important win in the program’s history.

“For these kids to play the way they did this year was flat-out amazing,” said Brian Presley, the Crusaders’ first-year coach. “It’s great for them to finally experience something like this.”

Katje, Calvin Christian’s workhorse right-hander, came off a six-inning outing in a Monday victory over Foothills Christian to pitch four innings in which he allowed just four hits and three walks. Roberts completed the shutout with three solid innings of relief.

The Crusaders (16-9) gave their pitchers plenty to work with, too. Before Katje took the mound, they scored three first-inning runs with the benefit of only one hit. Julian (18-5) made four errors in the first three innings, paving the way for five Calvin Christian runs.

Katje, batting cleanup, drove in a run in the first and added an RBI single as part of the Crusaders’ three-run seventh.

“It’s great to be able to have a senior year where we come out as champions and the first baseball team that really competes,” Katje said. “Having that early lead gave me a lot of confidence as a pitcher.”