The Vista Murrieta softball program will be well represented when the Women's College World Series kicks off Thursday. 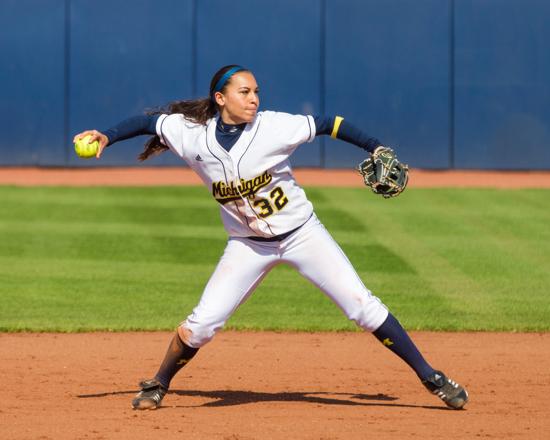 Michigan shortstop Sierra Romero, a Vista Murrieta High alumna, has led her team to the Women's College World Series while setting her school's home run record in the process.

Back on April 26, the Vista Murrieta High softball team monopolized the action for a time during a Big Ten Conference college softball game between the visiting Michigan Wolverines and Nebraska Cornhuskers.

Stepping into the batter’s box was Michigan shortstop Sierra Romero, who starred for the Broncos from 2009-12.

Meanwhile Romero’s former teammates ---- the twin-sister battery of pitcher Tatum Edwards and catcher Taylor Edwards of Nebraska ---- were conspiring to get her out.

“I had a little giggle to myself inside,” said junior Tatum Edwards, who teamed with Romero at Vista Murrieta in 2009 and 2010. “I kept a straight face, but inside I was excited and anxious to pitch to her.”

This wasn’t just any batter-pitcher matchup, either, as Romero would be the eventual conference player of the year while Tatum earned Big Ten pitcher of the year honors in 2013.

“It was kind of weird at first, but you just kind of go with it,” Romero said. “You don’t really focus on that when you’re in a big game like that. The friendship, you put it aside for a little while because you’re trying to win the game. But after the game, you look back at it and laugh and everything is fine again.”

In the three-game series, Romero was held hitless (0-for-3 with a walk) against Edwards, but there’s a chance they could meet again in Oklahoma City before June 5.

Nebraska and Michigan were among eight teams that advanced to Women’s College World Series which begins Thursday. During the weekend, Romero’s Michigan team knocked off Louisiana-Lafayette by winning two in the best of three Super Regionals. Sunday the Edwards twins, both juniors, helped the Cornhuskers take a thrilling 2-1 super regionals series win over Oregon, the No. 4 ranked team in the nation.

Romero, who set a Riverside County record with 45 home runs at Vista Murrieta, made a seamless transition to the collegiate level by socking a school-record 22 round-trippers as only a freshman this season.

“I just wanted to make sure I stayed aggressive (at the plate),” Romero said. “I don’t want to hold back anything. I am a very aggressive hitter and I don’t want to go up there scared. Never did Hutch (coach Carol Hutchins). She wanted me to keep that aggressive swing and hunt my pitch. I kept doing that.”

The most challenging adjustment for Romero might have been playing shortstop, a position she didn’t play with her OC Batbusters travel ball team as a second baseman. She committed 10 errors in the first 13 games. Romero admitted her arm isn’t her greatest asset as a player so she worked tirelessly to be quicker to the ball to make up for it.

“In the beginning I was trying to be too fast,” Romero said. “I felt like since I was at shortstop that I didn’t have as much time as I normally do when I played second base. I felt like I had to hurry. That’s when I got into trouble when I tried to rush myself because I didn’t make the hard throw. Hutch told me, ‘You can slow down. You don’t need to rush. Your arm is going to be able to beat the runner. You just need to focus on fielding the ball and throwing it.’ As soon as I slowed myself down, I did much better.”

Like Romero, the Edwards twins proved they could wallop the big fly as both finished among the top 10 in home runs in their conference. Taylor’s 12 homers tied for fifth in the Big Ten while Tatum’s 11 dingers were tied for ninth.

“She’s been with me every step of my pitching career through my ups and downs and through everything I have gone through,” Tatum said. “Definitely I know for a fact that if I didn’t have her to pitch to everyday, I would not be the pitcher that I am.”

Tatum compiled an eye-popping 30 wins in 240 innings with the Huskers. She recorded a 1.81 ERA, held opponents to a .191 batting average and tallied 214 strikeouts to become Nebraska’s first-ever conference pitcher of the year honoree.

This season the changeup and drop ball pitcher added a new wrinkle to her repertoire ---- a rise ball.

“I knew that I needed to bring something else to my game so I could get to the next level that I wanted to be at,” Tatum said. “The rise ball was something that was called upon from my coaches and really just been trying hard to work at it. It’s a pitch I tried to throw before, but I didn’t have too much success with it. I have been really, really trying to focus hard on it and just work it in when I can.”

Both the Edwards twins and Romero have younger siblings at Vista Murrieta with bright softball futures. Romero’s younger sister, Sydney, is a sophomore verbally committed to the University of Oklahoma, the school Michigan plays Thursday to open up the World Series.

Tristen Edwards, who just completed her freshman year with the Broncos, is following in her sisters’ footsteps with a verbal to Nebraska.

It’s a sign that there could be more friendly rivalries to come at the collegiate level within the Bronco softball family.