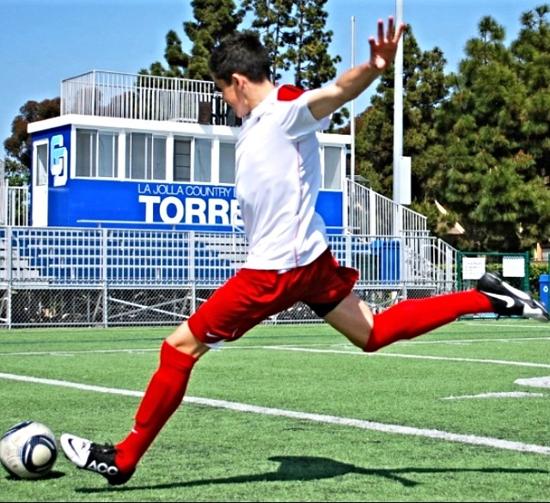 There were times, last summer, when Roman Martin yearned for simplicity.

Immersed in South American culture, footballing for a Brazilian semi-professional soccer club thousands of miles away from his San Diego home, the then 15-year old kid encountered sky-scraping barriers, materializing around him.

“I was sort of handicap, in a sense, socially and mentally,” the rising junior La Jolla Country day Torrey and Nomads soccer club central midfielder said.

“I was clueless. I couldn’t speak or understand Portuguese. And my coaches and most of my teammates couldn’t speak or understand a word of English, which made the transition to their style of play difficult. In America, the style is very organized with set formations, but Brazilians play much differently. It’s all over the place, open and free flowing. Everyone plays multiple positions, so it presented challenges, initially.”

Daunting challenges. Language incompetency prevented questioning, instruction and constructive criticism for both parties. So, adapting meant relying on instincts and a cultural connector — the language of soccer.

“It’s universal,” Martin said. “No matter what language you speak, what country you’re from, the color of your skin, soccer is soccer. You can kick and pass a ball, you can play with a group of teammates.”

It resulted in the game-winning goal in the semifinals of the Barcelona cup and an invitation to return. Next week, Martin ventures back to Brazil for his fourth summer stint. However, this time, Martin embarks on a new journey with a new team — Pequeninos do Jockey — new coaches and new teammates, armed.

“It means thank you. That was the first of many words in the Portuguese language that I learned from my tutor at the Brazilian Cultural Center thus far.”

“Like any parent, you always have concerns,” said Jeff Martin, Roman’s father.

“I viewed it as a tremendous growth opportunity for Roman. At some point in our lives, we have to step forward and take care of ourselves, so developmentally, separate from the soccer, it’s an amazing opportunity to learn from and experience new cultures and languages. Not to mention, Roman is exposed to a different style of play than in the United States.”

In addition, it’s peaked the interest of several NCAA Division I soccer programs, such as in the ACC, the Ivy Leagues and Big East, all clamoring for Martin’s services.

“There are plenty of paths to playing soccer in college and beyond,” Jeff said. “Playing in Brazil, we believe, is an alternative path that will provide Roman with a well-balanced game.”

That’s ultimately what Roman hopes to gain from International play.

“I love soccer, “ Roman said. “This gives me the opportunity to play the game I love while gauging where I am as a player, in my development, against top competition in a different country.”