Body paralyzed, but not his spirit 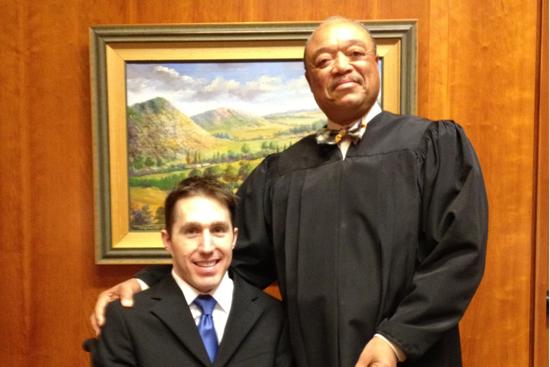 Dylan Aste (left), who was injured while playing football for Orange Glen High, has his photo taken with Judge William McCurine Jr. after Aste was sworn into the State Bar of California.

During a high school football game in October 1998, El Camino running back Sean Sweat swept around end. Near the end of a 40-21 loss for Orange Glen, Aste came flying in from his strong safety position and lowered his shoulder.

Sweat got up and went back to his huddle. Aste, a sophomore, was taken off the field in an ambulance.

“I immediately went limp,” Aste said. “It was late in the game. I was upset we were losing, and I might have gone in extra hard.

“The thing I remember was coaches, trainers and doctors surrounding me on the field. I was on my back. It felt like I was still in a tackling position.”

Aste had broken two vertebrae in his neck.

Aste’s mother, Kathleen, was in the stands with family and friends. She didn’t immediately grasp the severity of the situation.

“I always scanned the piles and looked for No. 20,” Kathleen said. “I didn’t see Dylan’s No. 20, and when someone is down on the field that long, it means something is wrong.”

On her way down to the field, Kathleen said the father of another player told her not to worry. The injury was probably just a stinger, and her son would be OK.

“The ambulance driver, though, didn’t sugarcoat it,” Kathleen said. “He told me Dylan was paralyzed.”

The injury meant Aste would be confined to a wheelchair.

Michael Carter, Aste’s best friend since age 10, was the only non-family member allowed near Dylan in the hospital the night of the injury.

“I’ve never encountered an athlete like Dylan,” Carter said. “He was the starting strong safety as a sophomore and should have been a starting running back, too. He was crazy good.

“And he had an I-won’t-quit attitude.”

Aste spent 15 days at Palomar Hospital, and his mother never left his side. He then spent eight weeks in rehab, but physical therapy couldn’t correct what was broken.

“Dylan’s competitive spirit is what got him hurt,” his mother said. “He has always been a fiery competitor. And he has always identified himself as an athlete.

“After the injury, he was set adrift by himself. But he was always an A student, smart, interesting. He just needed to find a way to use those things to his advantage.”

“Dylan and I bonded,” Hamm said. “We go to Aztecs and Chargers games.

“He had some down times, for sure. But he dealt with it, didn’t fall into drugs or alcohol. He dealt with his injury like an athlete.”

Kathleen, who worked in Point Loma, would drive Dylan to SDSU in the morning, then pick him up on her way home.

Aste, 30, who has limited use of his arms, has a specially equipped van but still can’t drive. He’s in the process of learning to drive with hand controls — something he said “would be life changing” — but hand controls are extremely expensive.

After graduating from SDSU, Aste enrolled at the University of San Diego School of Law, earning a degree while finishing in the top 10 percent of his class.

“I really like the legal field,” Aste said. “I worked for three judges in law school, so I have a lot of experience on the judge side.

“I’ve had a lot of part-time positions over the last couple of years, but haven’t nailed down that full-time position.”

Aste said he’s still not used to being in a wheelchair, but he changed in college when he was forced to be on his own.

“My mother has been my biggest champion the whole time,” he said.

Hamm calls her a true saint. Carter said she’s the strongest human on the planet.

“Michael Carter and his sister, Stacy, and their family have been with me the whole time, too,” Aste said.

Neither Aste nor Carter had a father in their lives.

“Dylan is a complete genius, a person with amazing qualities,” Stacy Carter said. “He had some dark times, but I’ve never seen him throw a temper tantrum.

“If I’m having a bad day, if my kids are acting up, I take a step back and think of Dylan. The injury hasn’t broken him. He’s an inspiration to me.”

Despite being injured on the football field, Aste doesn’t blame the game.

“Going in, I knew the risks involved in playing football,” Aste said. “If a parent were to ask me if his child should play, I’d say, ‘Yes.’ What happened to me was a freak accident.

“I watch football all the time. I’d love to be involved in the game, but it hasn’t worked out. I still live and die with San Diego State.

“I still love the game.”