Player has surgery after chance discovery of rare bone cancer. 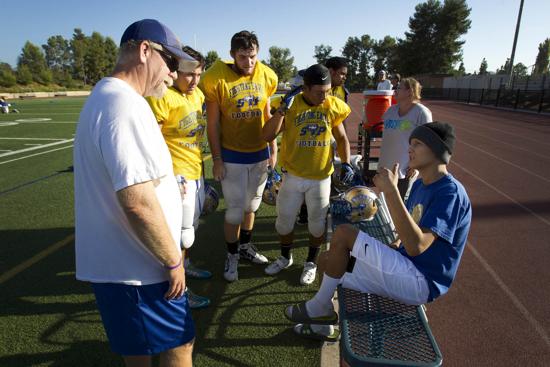 ESCONDIDO — There is something to be said about speaking up in the training room.

After missing most of the 2012 football season with a shoulder injury that was serious enough to require surgery, San Pasqual High running back Jesse Crowder was competing in track last spring.

With a little soreness, he asked Eagles trainer David Smith to take a look at the shoulder.

“And while I was there, I told him my leg was bugging me a little and could he take a look at my hamstring,” Crowder said. “Right away, he said something wasn’t right.”

Smith suggested X-rays, which revealed that the femur — the main weight-bearing bone in Crowder’s right leg — was eroding.

After seeing a battery of doctors and specialists, he was diagnosed with Ewing Sarcoma, a rare bone cancer. Crowder was told the tumor had been growing for about two years and there was a 90 percent chance the cancer had spread to his lungs.

“I spent a lot of time, with my mother, girlfriend and her family, crying and praying,” Crowder said.

More X-rays and tests showed the cancer had not spread to the lungs, and doctors said surgery could save his leg.

First, Crowder received chemotherapy with some sessions leaving him with heartburn so bad it landed him in the hospital for a week.

“When they told me about this, I was scared out of my mind,” Crowder said. “Then I started to get sick from the chemotherapy.

“I was doing chemo five days a week for up to 60 minutes. And I was taking kidney medicine to control bleeding. I had pain in my back and hips. I was bleeding out of my nose and spitting up black stuff. My nails turned blue and my hair fell out.”

NFL players like LaDainian Tomlinson, Ryan Mathews and Reggie Bush reached out to him, prompting him to get involved with the Make-A-Wish Foundation.

“I wanted to help bring a smile to the little kids in the hospital,” Crowder said.

It’s that kind of spirit his teammates love.

San Pasqual Athletic Director Andrew Clark, who is also the offensive coordinator on the football team, said the Eagles chipped in to buy Crowder a letterman’s jacket.

Of course, it had Eagles and San Pasqual’s “United We Stand” mantra on the back.

“The chemo really beat Jesse up,” Clark said. “He wanted so badly to finish the school year but missed the last three weeks.”

Crowder finally underwent surgery two weeks ago. The options ranged from removing a small tumor to amputation. Surgeons ended up removing a 7-inch portion of Crowder’s femur, inserting a titanium rod and packing that in a donor’s bone.

While he won’t return to school until after the first of the year, Crowder has gone from a wheelchair to a walker in two weeks.

Physical therapy is challenging, but he attacks it like an athlete.

“Jesse’s tough,” said San Pasqual standout receiver JaJuan Thomas, one of Crowder’s best friends. “He’s a great guy, a fun guy. Everyone on this team would do anything to help him.”

Sara Rowland, Crowder’s girlfriend, and her family have also been a big help.

Since Crowder’s room is on the second floor of his home, he has moved in with the Rowlands.

“Jesse and I have been together for a year-and-a-half,” said Sara, a cross country runner and dancer until hip surgery cut short her career. “We had an extra room on the first floor, and my family was fine taking Jesse in.

“His mother stayed with us the first few days. But she’s OK with leaving him with us now, and she visits all the time.”

This is the second emotional gut-wrencher for the San Pasqual football team in two years.

“Tony has been amazing in all this,” Clark said. “He told the team not to pity Jesse, but to treat him normal, as they would any other injured teammate.”

The team’s concern for Crowder was evident at practice Wednesday. During a water break, teammates gathered around, shook his hand, wished him well and viewed photos from the surgery.

“Jesse wasn’t a star player,” Corley said. “But he was a good player, a guy who would have helped us. He was a good change-of-pace back, a kid with some speed. He understands our offense and would have played on all our special teams.

“More than that, though, he’s an Eagle, he’s one of us, and I couldn’t be prouder of the way he has handled this and the way our team has reached out to him.”