Army-Navy has facility of dreams 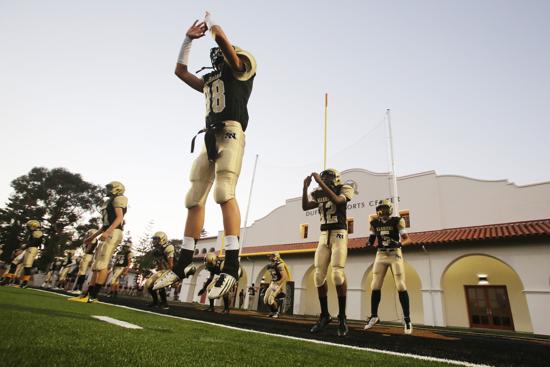 Army-Navy football players warm up at their new sports facility before Friday night's game against Bishop's.

CARLSBAD — There were one or two issues with Army and Navy Academy’s old multipurpose dirt and grass field.

“There were clumps,” added 81-year-old John Maffucci, the former athletic director and coach of just about every sport at the private military boarding school. “Areas were burned out from overuse.”

Not bad, considering that all Maffucci wanted nine years ago was synthetic turf.

The Warriors will host a ribbon-cutting ceremony at 3:30 this afternoon to celebrate their new digs. Friday night, Army-Navy played its second home game at the stadium named after Bliss, with Bishop’s serving as a rude guest, handing the Warriors a 49-0 shutout.

And it didn’t matter. The star of the evening was the facility, from the bright lights to the sand-colored Spanish architecture, topped by rust tiles. From the colorful lines etching the soccer and lacrosse boundaries, to the rust patches on the south goal line, 27- and 12-yard lines, identifying the first- and second-base cutouts and pitcher’s mound.

Come spring, the turf’s minuscule black pellets will be kicked up by ground balls.

Army-Navy Academy opened in 1910 in Pacific Beach. The all-boys school moved to its present location atop a bluff overlooking the Pacific Ocean in 1936.

The on-campus joke is that Maffucci helped with the move. The man has been a part of the campus for 58 years. The day before Friday’s game, Maffucci walked across Carlsbad Boulevard to the old gymnasium and pointed to old pieces of the floor beneath pullout bleachers.

John Dodge, who put a son through Army-Navy, is the architect credited with the redesign project. When Maffucci asked for a new playing surface, Dodge started drawing lines, thinking gymnasium, archways, tile floors worthy of the Sistine Chapel.

Maffucci and Bliss pitched donors. Dave and Cheryl Duffield, with one Warrior graduate and another still in school, wrote a $3.5 million check.

“It used to be a dirt field,” said Allen, who played at Army-Navy when he was a Christian High student. “Day games. No lights.

“They’ve done an absolutely tremendous job. It’s one of the top facilities in San Diego. It’s not too big, the perfect size.

“And they kept with the culture of the school. They didn’t go modern. They kept it who they are.”

The Coaster runs behind the visitors’ sideline. Military bugles blare from speakers, pointed from the campus across Carlsbad Boulevard. Palm trees sway behind the south end zone.

“Oh my, this field is ridiculously nice,” Graft said.

“It’s awesome,” Bishop’s lineman Blake Dorvillier said. “The seats look so comfortable. At halftime, you could just smell the popcorn. And smoked meat was grilling.”

It was just one game, a loss. But the Warriors are blessed with a new home. A beautiful new home.