The Kearny football team hosted its final home game of the season at Birt Slater Field. 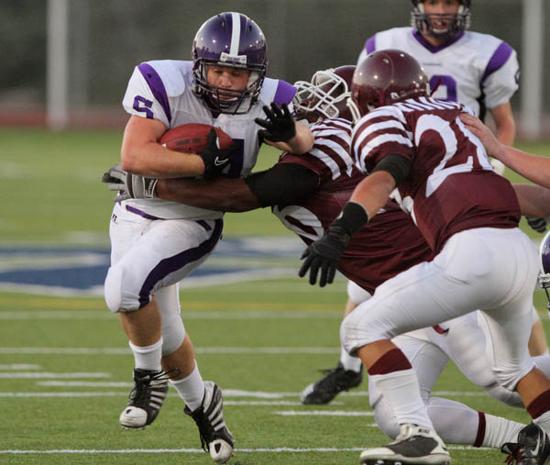 Santana running back Spencer Love is tackled by Kearny's Ricardo Gomez as Ryan Paine, closes in at right.

Kearny hosted its final matchup of the season on Friday, bidding farewell to the house that iconic Komets football coach Birt Slater built decades ago while holding a clipboard.

The field — named after Slater in 2006 — will soon be torn up and replaced, undergoing renovations that will relocate the Komets (1-4) the remainder of the season.

“Madison,” said Kearny coach Kenny Nears said prior to an 18-16 defeat to Lincoln. “They’re allowing us to play our home games at their football stadium including our home-coming game.”

In light of the finale, Nears and the Komets wanted to honor the late Slater by wearing the old school uniforms he introduced back in the 60s, which featured vertical stripes on the shoulders.

“The stripes on the Kearny jersey aren’t just stripes,” Cheryl Hibbeln, principal of digital media design at Kearny who oversees athletics told the U-T, referring to the vertical pattern on the shoulders.

“They represent something much bigger and much deeper than a maroon and white line. They represent years of a football tradition that is incredibly important to this community.”

Above all, the uniforms represent history.

History initiated by the most revered and influential coach in Kearny’s 72-year existence, who recently passed away on September 3 at the age of 89.

Thus, donning the jerseys would have been a small token of gratitude to the Kearny high legend and a fitting, temporary goodbye to the field.

The rule — reviewed and then reformed in 2007 — prohibits any stripes in the shoulder area from exceeding 3.5 inches in length and regulates the decoration.

“Basically, the gist of the rule is that the away team’s jerseys have to

be all white and the home team’s jersey have to be all dark or nonwhite,”

By definition, the stripes violate law.

“The administrators’ hands were tied on the matter,” Nears said.

“It would have been nice to show our respect and appreciation for coach (Slater), but there was nothing they could do about it. Kearny received approval to wear them for home coming.”

Yearning for change, Slater introduced the design early in his tenure.

so I went home and tried to figure out what to do,” Slater told the U-T years ago.

“I was watching a game and saw this outrageous uniform with stripes. I figured we damned well couldn’t lose wearing that uniform. We’d either win and be proud or we’d get laughed at.”

Donning new apparel, the Komets experienced the former, posting seven victories in 1961 before capturing section titles in 1963 and 1964. Thus, the design became a staple at Kearny and a significant piece of Slater’s legacy — something entrenched in Kearny’s history.

Regulations, however, are regulations. And should not ever be broken.

However, under these circumstances, where a football team is playing its last home game of the season on the a field named after the coach who essentially birthed this iconic symbol, it would have been special.

It would have been a grand gesture and tribute from Nears, the players and the administrators. One that would never be forgotten in the Kearny community.