Call them hicks, but also call them winners. 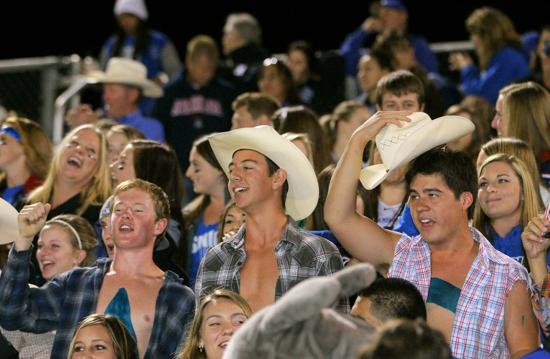 Cowboy hats in the stands lend a distinctly rural flavor to home games at Ramona.

RAMONA — The first song blaring over the loudspeakers 44 minutes before Ramona High’s homecoming game against Rancho Bernardo was “A Country Boy Can Survive” by Hank Williams Jr.

A sampling of the lyrics:

I can plow a field all day long,

I can catch catfish from dusk till dawn.

Hollywood may have been the theme of Ramona’s homecoming Friday night, but do not be misled. The Bulldogs pride themselves on their rural image.

Sheriffs have been known to roam the parking lot via horseback. Hay is occasionally strewn outside the visiting team’s locker room. Pickup trucks far outnumber cars in the parking lot.

They call the Bulldogs something else, too:

Two minutes, 47 seconds into the game, Brandon Gansch plowed into the end zone off right tackle from 2 yards out, the Bulldogs led 6-0, and the party was on.

The final was Ramona 30, Rancho Bernardo 0, and the season of perfection rolls on atop the mountain. One season after advancing to the section Division III final, the Bulldogs are 6-0 and ranked sixth in the county. In a one-high-school town, Ramonans love their pet Dawgs.

“On the weekends, if you go to church or the grocery store, everyone’s talking football,” assistant coach Mike Ernst said. “(Fans will say) ‘Hey, great game. You guys look good. Keep it up.’ In some towns, they might not know there’s a varsity team in town.”

Befitting a town in which five acres is the minimum lot size in some quarters, the Bulldogs play a physical brand of football. They prefer to travel by ground, not air. The fullback is T-Bone Williams. The head coach isn’t some Xs-and-Os-scribbling ex-quarterback. It’s former San Diego State offensive lineman Damon Baldwin.

Milling about at midfield after the shutout, lineman Patrick Hastings said: “We’re bred from our freshman year to hit people. We love being physical.”

Two of the Bulldogs’ victories this season fall under the “turn heads” category — a 52-22 romp over Grossmont and 10-6 home slugfest with Helix.

“A lot of teams don’t like coming up here,” Kerchner said. “There’s a type of fear almost.”

The atmosphere is special. On the chain-link fence in front of the packed home grandstand, some 125 homemade posters were on display Friday, the artwork of cheerleaders and song leaders.

The main course at the Bulldogs Snack Shack: tri-tip sandwiches. Baked potatoes and Krispy Kreme donuts are other options.

Truth is, the Bulldogs fudge a little on the hick image.

Kerchner drives a BMW 330ci. He has outgrown his lone cowboy hat and pair of cowboy boots. Linebacker/fullback Christian Drews lives in a gated community.

“We act like we’re a little more redneck than we really are,” Kerchner admitted. During games, Kerchner might break into a Southern drawl when chatting up an opponent.

Still, perception is reality. So when opposing players step outside their locker room moments before kickoff, with the agriculture department about a football field away, their senses will tell them they’re not in the city anymore.