Eagles players don’t request to wear jersey number 86; it must be earned. 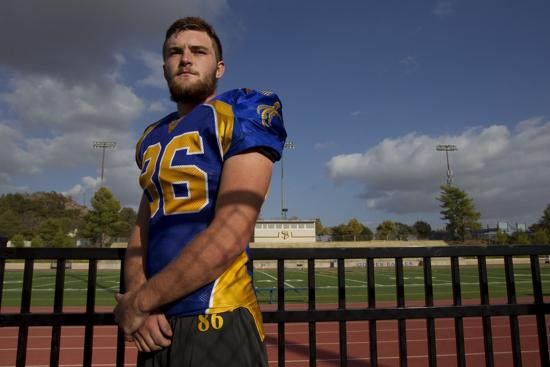 ESCONDIDO — Before Bob Woodhouse arrived at San Pasqual High as football coach in 1977, there was no tradition surrounding the young program.

Losing games by 66 and 70 points is hardly an inspiring legacy.

So Woodhouse set out to build pride within the program, most of which has survived to this day.

One of the things that makes the Eagles a bit different from most teams is jersey number 86.

At most schools, numbers in the 80s belong to receivers. Not so at San Pasqual, at least when it comes to number 86.

Scott Case was a senior middle linebacker at San Pasqual when Woodhouse arrived. His number was already 86 from his days as an Eagles receiver. There was nothing special about the number at that point.

The next year, sophomore Brian McFadden, also a middle linebacker and Case’s brother, asked for his brother’s number and wore it with pride for three seasons.

In 1982, Barry McKeever wanted to wear the number worn by his father Mike McKeever, an All-America guard at USC, but Barry’s brother Mac played for the Eagles and was wearing number 68.

“I wanted dad’s number, but Mac already got it,” recalled Barry.

So McKeever took his uncle Marlin McKeever’s number, which was 86.

“Bob made it an iconic number for linebackers at San Pasqual,” said former assistant coach Mike Dolan, who succeeded Woodhouse as head coach. “Doing something special was a no-brainer.

“From that point on, 86 was special. It almost always went to a linebacker and you couldn’t request it.

“Scott was a football junkie on the team that produced the first winning football season and first playoff game in school history.”

In 24 football seasons since Case’s senior year, a linebacker has worn number 86. Three times the coaching staff did not assign 86 to anyone. Anthony Moss, a wide receiver in 1996, is the only offensive player to receive 86.

One defensive back and four defensive linemen were given that number after it was decided there was no stellar linebacker those years.

“Scott was the original 86 in my eyes,” said McFadden, who retired from the Army as a colonel and is now a program manager for QinetiQ North America and living in Harvest, Ala., with wife Deb and their eight children. “If you’d ask Scott about his number, he would probably say he told everyone 86 was a special number decades ago.

“But he’d be really honored Coach Woodhouse did this.”

Kyle Hendrickson, a 6-foot-4, 235-pound senior, is wearing number 86 for the third varsity season this year after also wearing it on the freshman team.

Kyle would never switch from 86.

“Once I heard about the 86 tradition, I was honored to wear it,” Hendrickson said. “I changed my mind right away. I was honored and humbled.

“When I went home that night and told dad what I did, he said I should start my own tradition.”

Hendrickson is hoping to wear number 86 next year in college.

“Players on other teams keep asking me if I’m also a receiver with that number,” Hendrickson added. “At this school, 86 is a linebacker.”

Barry McKeever took his 86 with him to college. He wore 86 all five years he was at Stanford.

“It still means a lot to me to be part of the 86 tradition,” said McKeever, a real estate broker in Santa Clarita and father of five children. “I’ve been doing play-by-play of high school games up here on radio and I always look to see if there’s an 86 at linebacker. I’ve never seen one.”

McFadden is in the San Pasqual Hall of Fame, and McKeever, who played against Hendrickson’s dad when he was at Cal, will be inducted soon.

Current San Pasqual coach Tony Corley, who was a teammate of Barry McKeever’s, never harbored any desire to wear the legendary number 86 as an Eagle.

“Everyone knew Barry was 86 from the first moment he set foot on that campus,” said Corley, whose team is 5-0 and ranked No. 2 in the county heading into Friday’s game against No. 1 Mission Hills. “I grew up thinking 86 as linebacker was a normal thing at San Pasqual.”

It was San Pasqual High football coach Bob Woodhouse’s decision to make wearing number 86 a special honor. Following are players who have worn that number for the Eagles: