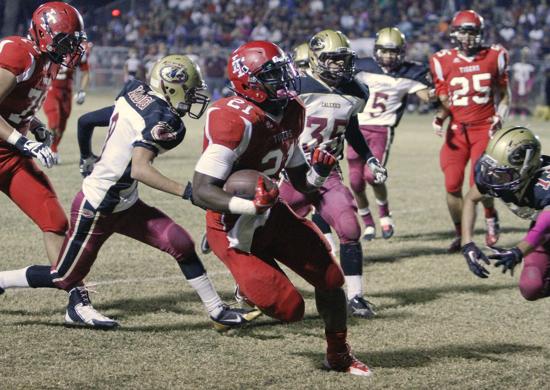 Running back Royce Freeman of Imperial scores on a 9-yard run Friday against Calexico while raising his career rushing total to 6,778 yards.

IMPERIAL — Rare is the case when the public address announcer begs the band to stop playing after the home team scores a touchdown.

Consider this a special occasion.

Out of a full-house backfield, quarterback Chris Carter faked an inside handoff and pitched right to Freeman, who broke three tackles and bulled into the end zone to eclipse the record of 6,694 yards set by Escondido’s Ricky Seale from 2006-09.

The Imperial Valley League game — won easily by Imperial, 49-14, over Calexico on Friday night — was halted for a 5-minute celebration after Freeman’s first-quarter score.

Freeman, also a three-time league MVP in basketball, was presented a plaque by the Imperial Union School District, and then he got the microphone.

“I’m very fortunate and very blessed to be the football coach at Imperial right now,” Kerry Legarra said. “It’s not only the gifts Royce brings, it’s the kind of passion he has. He’s just a remarkable young man.

“He’s very, very mature for as young as he is, and he’s extremely humble. I’ve been doing this for 33 years, and he’s the best I’ve ever been associated with.”

Considering the section has been home to talents such as Marcus Allen, Reggie Bush, Ricky Williams, Terrell Davis and Rashaan Salaam, the accomplishment is extra special to Freeman.

“It’s amazing,” said Freeman, who has committed to Oregon. “There’s no better company.”

A “Yes, sir! No, sir!”-type of guy who was raised by a military father and a mother who works for Imperial Valley College, Freeman added: “I feel very blessed and humbled to have this opportunity.”