With two weeks left in regular season, some playoff teams will be lacking credentials. 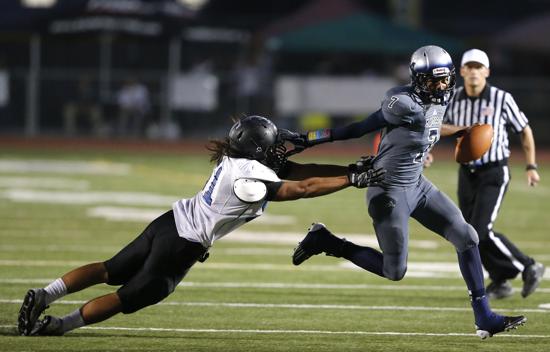 There is a reason the San Diego Section football seeding committee doesn't vote on the playoff pairings before the seventh week of the regular season.

Too many unpredictable things can happen before season's end.

Take last Friday's games for example. It was a night that blurred the playoff picture with three Top-10 teams, including No. 1-ranked San Pasqual, losing.

Oceanside hosts La Costa Canyon on Friday in a game that could go a long way in determining the No. 1 seed.

"This game was for pride, now we start playing for seeding and a league championship," said Oceanside coach John Carroll after his No. 4-ranked Pirates beat No. 6 Ramona 42-0.

The top seed in the Open Division will probably play Steele Canyon (2-6). The second seed will get Poway (3-5).

Neither, Poway nor Steele Canyon should be in the Open Division, but a flawed playoff format based on a team's record over the last three seasons, dictates they are.

Olympian could make a statement Friday with a win over Eastlake.

Record-wise, Imperial (8-0), Mission Bay (7-1), El Capitan (7-1), and Madison (7-1) would be the top-four seeds in Division II. But Rancho Buena Vista (6-2) beat top-ranked San Pasqual last Friday and hosts Mission Hills this week. Plus, St. Augustine (6-2) beat archrival and No. 5-ranked Cathedral Catholic. So the seeding committee will have to look beyond just records.

Division IV is a complete mess. La Jolla Country Day (5-3), Castle Park (4-4) and Central (4-4) could have staked claims to a top-four seed, but all lost last Friday.

The final two weeks of the season will determine the rest of the seeds.

Remember, this is the first season of the Open Division, which in theory features the county's top eight teams.

No longer are the other divisions determined strictly by size of the schools. Instead, divisions are supposed to be determined by competitive balance.

So big schools like Rancho Buena Vista with nearly 3,000 students are in a division with schools like Mission Bay, Madison, Imperial, El Capitan and St. Augustine, which are about half RBV's size.

And it's why big schools like Granite Hills and Bonita Vista are in with mighty mites like Parker, Bishop's, Christian and Santa Fe Christian.

And it's why Divisions IV and V are a mess.