Eastlake "ready to bring some pain" against Olympian. 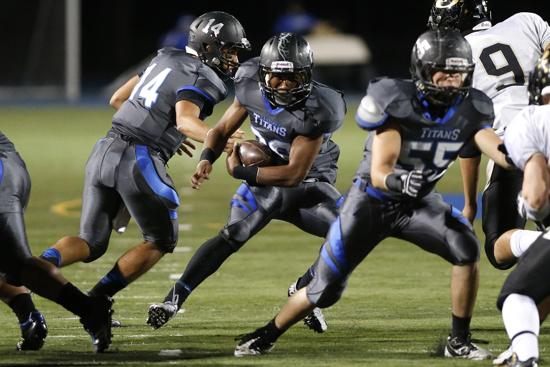 “We’re not real happy about it,” coach John McFadden said.

“We’re very (angry),” linebacker Keifer Graham said on the afternoon of the game. “We’re ready to bring some pain tonight.”

The cherubic McFadden walks along the sideline with a lanyard strapped around his neck, the Titans’ playbook protected by a plastic cover. Out of a double-wing attack, he stresses a stop-us-if-you-can, Ferrari-fast running game.

By comparison, the Oregon Ducks are virtual plodders.

Try this for rapid fire.

Barely two minutes into the game, Isiah Olave pulled in a pass from Izzack Morales, cut to the middle of the field, and didn’t stop running until scoring on a 69-yard touchdown reception. Seven-zip.

Two minutes, 56 seconds into the quarter, Traylon Reed burst up the middle for 38-yard TD scamper. 14-nothing.

With 1:57 remaining in the first quarter, Isaiah Strayhorn shot off the left side and raced in from 25 yards. 28-zero. End of game.

The Titans’ most famous football alum, Arizona Cardinals rookie safety Tony Jefferson, was walking the sideline, and by the second quarter, teammates and coaches were shaking his hand.

McFadden, 48, is in his 14th season as Eastlake’s head coach. His record: 120-40-3. He has never suffered a losing season. It’s accurate to say the Titans rule the South Bay, but it’s also unfair to geographically limit Eastlake.

Simply put, McFadden orchestrates one of the best football programs in the county. Rightfully so, he credits a veteran staff, including defensive assistants Lee Price and Eddie Minshew, who have been with him from the start.

“We’re a dysfunctional family,” McFadden joked, “but we always have each other’s back.”

The Titans’ M.O. is speed. Eastlake even breaks the huddle fast, sprinting to the line of scrimmage. Once out of the huddle, there’s none of this surveying the secondary. Morales squats under center, a wingback sprints in motion and — apologies to Rams fans — the Greatest Show on Turf takes off.

And deep. The 5-foot-11, 170-pound Olave, a wingback and cornerback, is the Titans’ heart and soul. His touchdown Friday was his 16th of the season. He averages 10.2 yards per carry.

Eastlake plays some defense, too — the shutout was the Titans’ fourth in five games.

More bad news for Eastlake rivals: The Titans are young and loaded. Strayhorn is a junior. Reed and fellow backs Dean Klaser and Greg Bell are sophomores.

“Yeah,” said Jefferson, posing for pictures during halftime, “Coach Mac’s got it goin’ on.”