Kin get kick out of playing football 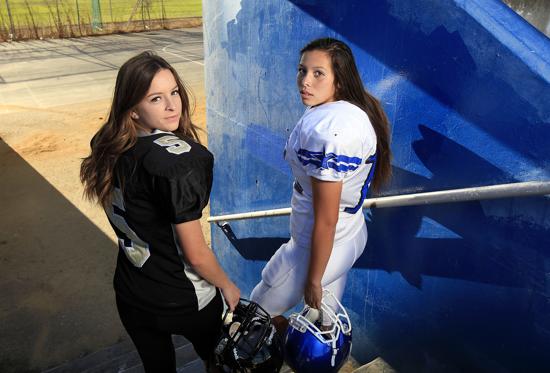 It’s not unusual for relatives to line up against each other on the gridiron.

But there was something very unusual about the cousins who met late October when the JV football teams of Chula Vista and Olympian high schools squared off.

Sporting the home black was junior placekicker Jessica Gregory. On the other side, sporting the Chula Vista blue and white, was her cousin, sophomore kicker Ariana Buckley.

Despite being close families (their mothers are sisters) and having played soccer together for years, neither one knew the other was becoming the first girl in their school to infiltrate the male-dominated sport.

“I put a tweet out one day about being on football, and Jess responded saying she was doing it, too, and I should go for it,” said Buckley, as she is known to her Spartan teammates.

“Once I found out about it, I thought it was so cool,” said Gregory, who competes in track as well as soccer and football at Olympian. “Here was my cousin, who I’ve played soccer with since we both started, and now both playing football — and against each other.”

Their paths to the gridiron are quite similar.

“I really had no interest in playing (football), but then my coach (Olympian varsity coach Paul Van Nostrand) approached me because the JV didn’t have a kicker,” Gregory said. “I guess he had seen that I played soccer and scored a lot of goals. He pleaded with me to go out.

“At first I laughed; I wasn’t convinced he was serious. Then one day he told me to be at (spring) practice on Tuesday at 4. I gave it a try.”

For Buckley, it was more of a personal challenge.

“I was in PE with a bunch of football players, who were trying to be so cool, so they asked if I wanted to try to kick one,” said Buckley, who also plays soccer and swims at Chula Vista. “They went out to about the 25-yard line.

“I really wanted to show them up. I made it and it flew way past the goal post. There was a football coach watching, and he called me over and asked if I ever played before and I should try it.”

When the season started, the rest of the school got to see the girls’ historic steps were for real.

“I wore my jersey to school on a Friday before our game, and a lot of the teachers and students asked if it was someone’s on the team,” Gregory said. “I said yeah, MINE! They were so supportive right away. It was like I got 100 new friends.”

Buckley has a strong foot, driving kickoffs down to the 10. She has converted three of her first four extra-point attempts. For the first six weeks of the season, she handled all the placekicking duties for the Spartans. She was a little disappointed when she learned she would share time with a freshman boy they brought up. Being a self-proclaimed “tough girl,” she isn’t backing down.

She doesn’t back down against opponents, either. She made tackles on kickoffs against Mira Mesa and Sweetwater, including a TD-saving stop after taking a perfect angle across the field to slam down the runner.

“They’re even thinking about putting me on other special teams,” said Buckley, who is not a stranger to yellow cards in soccer with her aggressive play. “They’ve seen me hit in practice. There was one time I went 1-on-1 with one of our linebackers and we just kept going; neither of us would go down.”

As for the family matchup, the Spartans beat the Eagles, 7-6. Neither girl played a hand, but they surprised everyone afterward when they met at midfield and took off their helmets.

“People saw us and were asking if we knew each other,” Gregory said. “She’s my cousin!”