Who's top seed in the Open Division? 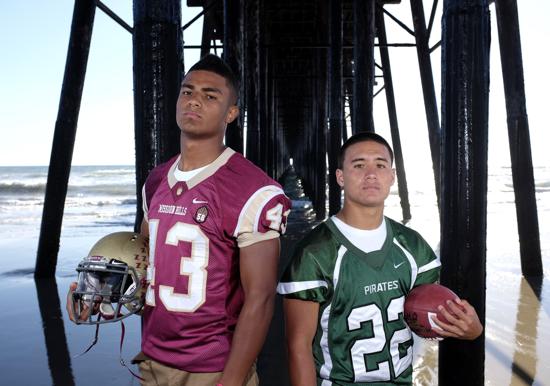 The teams of Fred Warner (Mission Hills) and Thai Cottrell (Oceanside) are among those at the center of the debate on who should get the No. 1 seed in the Open Division.

An eight-person committee will determine that Saturday when the group convenes at the Hall of Champions to decide the football playoff seeds for the Open Division and Divisions I through V.

“Not everyone will be happy once we’ve finished the process.”

Of the trio, one becomes the odd team out as the third seed despite each presenting legitimate arguments for the top spot in the Open Division.

To weigh the arguments, the committee — composed of former football coaches — intends to evaluate each program’s season using a software program provided by the section that computes team information input by coaches.

Other sources of reference include

“Just like those websites have their ratings and strength of schedule numbers, we have our own, although it isn’t a formula or a number, per se,” Schniepp said.

In addition to the information provided, coaches have the option to plead their case via comments typed in the system. Typically, they assess their team’s season along with a specific seed each coach believes his team deserves.

In the weekly U-T poll, Oceanside is the No. 1 team despite losing 30-6 to Mission Hills in Week 5.

However, Eastlake — No. 3 in the section — remains undefeated against San Diego opponents and has convincing victories over two Top 10 opponents, much like Oceanside.

Mission Hills only has one.

What will weigh more significantly? A perfect record in the section, blowout victories and a more difficult schedule or a lopsided victory over the No. 1 team in the region?

Schniepp said he doesn’t anticipate the decision will be unanimous Saturday, noting that it often isn’t. He said the wealth of information at the committee’s disposal will be critical in making the right call.

“A lot of that boils down to the integrity of that group,” he said.

“Of course, everyone has a bias, I think, because it’s hard to completely eliminate that, but I can tell you that they will make every effort to be fair to every football program and carefully examine every team thoroughly.”