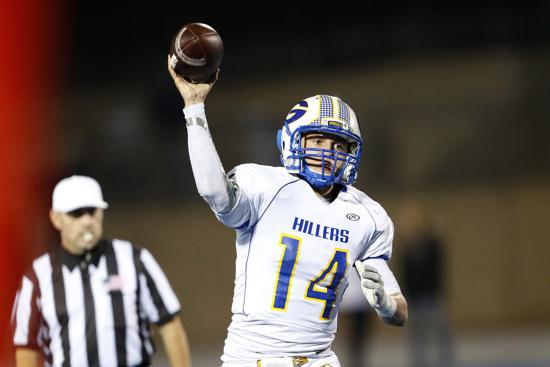 “Yeahhhhhh,” hollered the Grossmont High quarterback Friday night, his head tilted skyward as he crossed the Foothillers’ sideline after tossing the 87th touchdown pass of his high school career.

Then, in keeping with his playful, dorky image, he nearly knocked over the 20-yard marker.

The moment against West Hills hadn’t registered, that he had become the San Diego Section’s all-time passing yardage leader, but an assistant coach dropped the news.

Lawrence’s reaction? He pressed a bandage against his cut chin, making sure it wouldn’t fall off.

Grossmont routed West Hills 48-6, improving its record to 8-2 and strengthening its prospects of earning a top-four seed in the Division I playoffs. But the big picture, for one night, was focused on one player — Lawrence.

A starter since the first game of his sophomore season, Lawrence came into the game with 8,222 career yards passing.

None threw for more yards as a prep than Lawrence.

When the names were rattled off to him earlier in the day as he chilled in the Grossmont coaches’ office, Lawrence was humbled.

“It’s unbelievable,” he said. “It’s crazy. They were all so great. To know I’ll have more yards than them, it’s thrilling.”

His reaction after the game?

The memorable night began sluggishly for Lawrence. He completed just two of his first six passes. He bobbled a snap. He fumbled once. Nerves?

Then the Foothillers put their no-huddle offense into hyper speed. From early in the second quarter until Lawrence exited late in the third quarter, he completed 18 of 19 for 261 yards and four TDs.

A Hail Mary at the end of the half.

Bussey should know. A couple of weeks ago, Lawrence completed 29 of 38 for 508 yards and six TDs against the Norsemen.

“He’s a smart quarterback,” Helix coach Troy Starr said. “I knew as a 10th-grader he (would) be a really good quarterback.”

Lawrence is a quarterback in the truest sense of the word — reading defenses, often changing plays at the line of scrimmage.

“That’s a lot to put on a kid’s plate,” Grossmont coach Tom Karlo said. “But he can handle it.”

It helps that Lawrence is cerebral. His grade-point average is 4.29. He’s one of the strongest players on the team, owning the team record in the power clean at 275 pounds.

The only thing he isn’t is tall. Despite hanging upside down from a pole at night to try to grow taller, he’s only 6-1. Karlo figures that’s the only reason why his quarterback hasn’t been offered a scholarship.

“It bugs me a little,” Lawrence said.

He’s popular with his teammates because his head hasn’t swelled. He showed up at school Friday in pajama bottoms and his football jersey. He wore a wet suit to school on Halloween.

“He’s a super hard worker,” wide receiver J.T. Barnes said. “Then he walks around later in the day acting like a dork.”