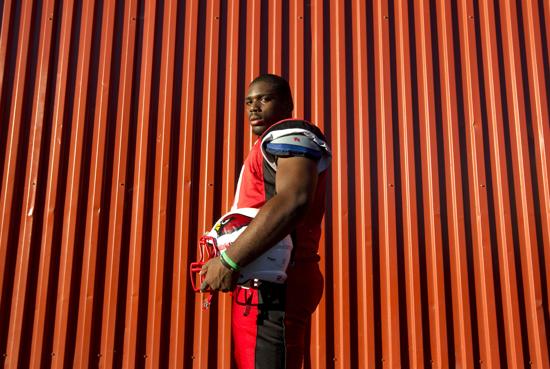 Bradford, whose father is imprisoned, sleeps in his own bedroom.

“I pretty much call him my son now,” says Grossman.

On Fridays, the 5-foot-11, 230-pound Bradford - who wears black, horn-rimmed glasses off the field a la Clark Kent - transforms from a mild-mannered metropolitan student into a sack master.

The Cardinals face Calexico in a Division III playoff game tonight at Patrick Henry, and if Calexico were smart, they’d dress their quarterbacks in armor.

In nine games, Bradford has recorded – and this is not a typo – a state-leading 24 sacks. Eight came in one game against Patrick Henry.

“When I step up to the line, I want you to fear me, like you don’t want to block me,” says Bradford, sitting on a bench at Hoover’s spacious front quad.

“And I want to make a quarterback’s life just hell.”

For all the macho football talk, Bradford’s a big softie away from football.

“He can bounce from every social group – gays, lesbians, gang members. And he’s never a problem. He’s one of those kids you just want to be around.”

Bradford doesn’t know where his father’s incarcerated or why.

“The first time,” says Bradford, “I think it was for drinking.”

He said his mother was injured in a car accident this year and was laid off.

A former teacher at Hoover, Grossman met Bradford during the teenager’s freshman year at the school. Bradford’s family couldn’t afford to pay for his physical so Grossman footed the bill.

By his sophomore year, Bradford began spending weekends in Eastlake.

Grossman pays for Bradford’s cell phone. The teenager earns an allowance by working the scoreboard and announcing at Eastlake Pop Warner games.

Later this year, Bradford, who has never seen the snow, will join the Grossmans on a vacation in Big Bear.

Grossman, who grew up in Philadelphia, can relate to the hardships Bradford faces. The former Chargers first-round draft pick said his father was an alcoholic, a gambler and abusive.

“I know what it’s like to go to bed with no parents,” he said.

Added Grossman, “If you turn your back on (kids), who are you then?”

“Without Burt’s influence,” said Ralph, “I believe Jaquille would never have achieved the success he did.”

It hasn’t all been unimpeded quarterback throwdowns for Bradford. He played varsity as a freshman … until grades came out and he was ineligible.

Ralph helped solved that by implementing a red-card system. If a player didn’t turn in homework, Ralph was notified with a red card from the instructor.

One red card was punished by lugging a red tackling dummy around the football field. Bradford red cards as a sophomore: eight. This year: none.

“No one likes to be called out,” said Ralph.

“Without a doubt,” said Grossman, “I’ve never seen a kid in high school that good.”

Grossman, in fact, is hounding a TV reporter to inform viewers about the phenom.

“Oh no,” said Grossman. “I’m turning into one of those parents.”