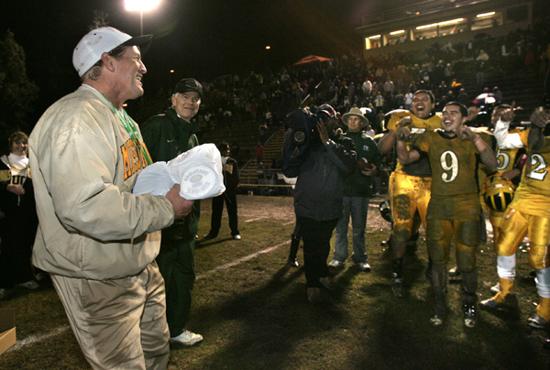 The players asked for it, so the coaches petitioned San Diego Section Commissioner Jerry Schniepp.

But the only way the commissioner could get the San Diego Section football championships in Qualcomm Stadium this season was to agree to fewer games and an adjusted schedule.

Fewer games means a tripleheader instead of a quadrupleheader. Only Divisions II, I and Open get to play in the Q.

With Chargers games in Qualcomm on Dec. 1 and 8, the best date available for the high school championships was Monday, Dec. 2.

The eight-team Open Division played last Friday and has nine days between games.

Divisions I and II, which have 12 teams, started the playoffs on Friday, Nov. 15. The quarterfinals were Thursday, Nov. 21. The semifinals will be played Wednesday.

That number is on paper only because teams aren't allowed to meet or practice on Sundays.

Several coaches asked Schniepp for a waiver of the Sunday rule, but it goes beyond the section.

A spokesman for State Commissioner Roger Blake said no Sunday practice is a state rule, agreed upon by the schools. Any waiver would have to go through the Federated Council, "so there is no way to waive it."

"So if we're lucky enough to get to the championship game, we miss two Sundays of preparation," said Mission Bay coach Willie Matson, whose team plays at Rancho Buena Vista in a Division II semifinal.

"And the second Sunday would be the day before the championships."

While there can be "no formal team meeting" on Sundays, San Pasqual Athletic Director Andrew Clark said schools are allowed to have a team dinner on a Sunday and coaches are allowed to attend.

So at least coaches can give their teams final instructions on logistics.

"Actually, I love this," said San Pasqual coach Tony Corley, whose team hosts Carlsbad on Wednesday. "It's a change of pace, a chance to refocus.

"We played Thursday, so we had Friday and Saturday to practice. All the schools are out on Monday and Tuesday, so it becomes a mental thing."

So it becomes a matter of who can overcome the bumps and bruises from the week before.

"Sprains, that type of thing, are different.

"I was one who asked for a waiver to practice, meet or at least have contact with our players on Sunday. But we asked to play in Qualcomm, so we'll live with this."

"I know what it's like to play in Qualcomm, and not play there," Matson said. "Playing there is better.

"Players are used to a routine, our routine will be a little shorter.

Beyond player preparation, getting the word to the student body that there is a game Wednesday - the day before Thanksgiving - and a championship game Monday on the first day back to school after the Thanksgiving break, is a challenge.

Every student will get a call from McCoy via a computer system reminding them of the game or games.

Booster clubs will be asked to get the word out and school marquees will blaze the message 24 hours a day.

It's not ideal, but it's the price teams pay to compete on the same field where the Aztecs and Chargers play.