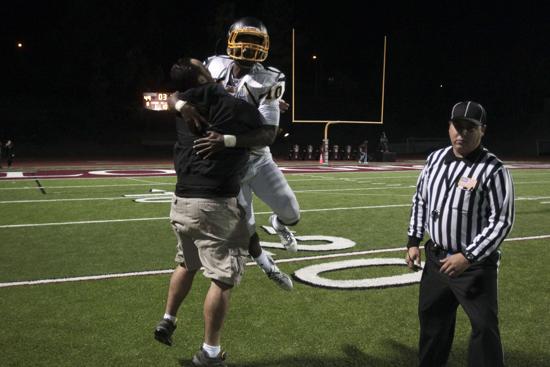 Mission Bay receiver Andre Petties-Wilson leaps into the arms of a coach after the Bucs defeated Rancho Buena Vista in the semifinals. Petties-Wilson had 11 catches for 307 yards and two touchdowns against the Longhorns.

Preview: No. 8-seeded Mission Bay outlasted Rancho Buena Vista in a semifinal slugfest, scoring the final two touchdowns in a 56-49 victory that gave the Bucs a seven-game win streak. No. 2 St. Augustine limited section all-time leading rusher Royce Freeman to 168 yards and zero touchdowns while racking up 617 total yards and eight touchdowns on offense to defeat Imperial 56-12 in the semis.

Season highlight: Despite a 42-7 loss at home in the regular season to league-rival Madison, the Buccaneers rebounded in the playoffs, defeating the Warhawks in the quarterfinals on a late-game touchdown pass to Petties-Wilson.

Quotable: “I woke up Thanksgiving morning in a really good mood,” said Matson, “but by turkey time, I was solemn because I was watching film on (the Saints).”

Championship past: This is Mission Bay’s eighth final appearance and first since winning the Division IV title in 2009.

Little-know fact: This is Matson’s second stint with the program, coaching the Buccaneers from 1984-88 and returning in 2004.

Quotable: “What matchups do I like? I don’t like any of them,” Sanchez said with a chuckle. “Their defensive coordinator is a cover zero guy and is going cover receivers with their best athletes and load up the box on us.”

Championship past: This is St. Augustine’s 11th championship match and second-consecutive final appearance. The Saints have won three of those matchups.