Holtville QB too much for Crawford 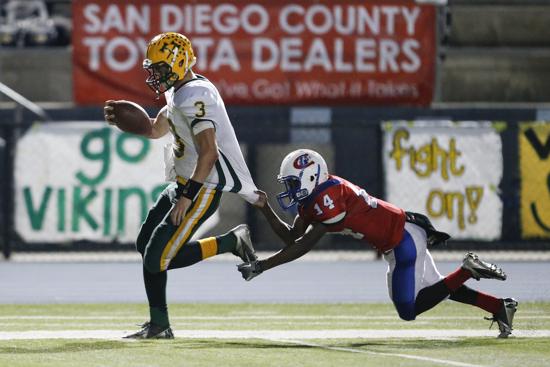 Holtville quarterback Clay Bowler, who rushed for three touchdowns and passed for another, tries to break away from Crawford defender Musa Musa in the San Diego Section Division V final.

Healthy this year, Bowler stepped behind center and shouldered the load for the Vikings — while spoiling things for Crawford on Saturday night at Mesa College.

Bowler rushed for three touchdowns, passed for another and contributed an interception on defense, leading Holtville to a 42-6 victory over the Colts for the San Diego Section Division V championship.

“This was our goal from the start of the season and it just feels amazing,” said Bowler, who rushed for a game-high 156 yards.

Crawford defeated Holtville 21-14 when the teams met in midseason. How was this so different?

“It was just simple adjustments,” said Bowler, who played wide receiver last season to limit contact. “We found spots we could run.”

It is the first section championship in 21 years for Holtville (11-2) and the sixth title overall for the Vikings.

The evening began well enough for Crawford (12-1). The Colts recovered a Holtville fumble on the opening kickoff. Six plays later they took a 6-0 lead on Ray Lyons’ 1-yard run.

Bowler and the Vikings took it from there.

The 6-foot-2 senior called his own number four of the first eight plays as the Vikings advanced inside the Crawford 30-yard line. Bowler kept it again, shooting up the middle for a 26-yard touchdown and a 7-6 Holtville lead.

Holtville’s Keven Reynoso blocked a punt on Crawford’s next possession, putting the Vikings 6 yards from another score.

Bowler used his legs again, this time to buy time in the backfield before finding teammate Josh Osuna for a 4-yard touchdown pass and a 14-6 lead as the first quarter came to a close.

Holtville made it 28-6 by halftime, adding second-quarter touchdowns on a 23-yard run by Bowler and a 3-yard carry by Osuna.

“I think our kids were in a daze from the whole championship aura thing,” said Crawford coach Michael Wright. “But they outplayed us tonight. They were the better team tonight.”

Summing up the year, Wright added, “This season was outstanding and these kids are amazing. To get 12 wins in one year after eight wins in eight years is remarkable. I’m proud of everyone.”