Saints in control from the start in game that ends with running clock. 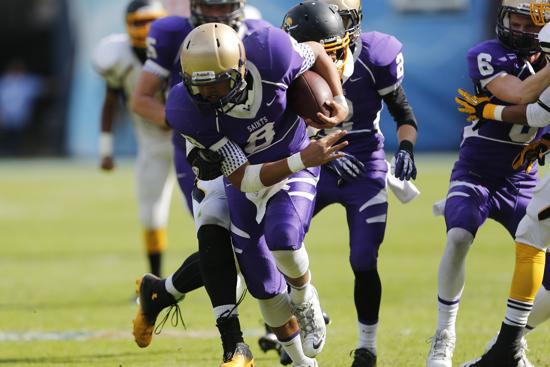 It is St. Augustine’s fourth section championship in program history.

“We executed the plays that were called and were able to get some big plays to open up the game,” said Saints quarterback Joe Joe Hudson.

Managing negative-five yards midway through the second quarter, eighth-seeded Mission Bay (12-2) quickly fell behind No. 2 St. Augustine (11-2), which scored four touchdowns in the first half behind the arm and legs of Hudson.

The senior quarterback threw TD passes of 33, 31 and 17 yards in first half in addition to scoring on a 31-yard run.

The Saints racked up 405 yards total offense and punted only four times.

“Our offense is predicated on what the defense gives us,” said St. Augustine coach Richard Sanchez. “If they allowed us to run the football, then we definitely wanted to establish that first, but they loaded the box on us, so we took some shots on the edges that paid off.”

Twice, Mission Bay threatened to nick St. Augustine’s 35-0 lead in the third quarter, inching inside the red zone following drives of 47 and 56 yards, but muffed the opportunities.

First, linebacker Tyler Herburger intercepted a pass intended for Mission Bay receiver Lamarriel Taylor and scurried down the field for a 98-yard pick-six.

Then the Saints scooped up quarterback Nicholas Plum’s fumble — his third turnover — to halt the Buccaneers’ drive. He completed 14-of-32 passes for 192 yards.

“In the first quarter, we were able to get a lot of pressure on (Plum) while maintaining our zone coverage across the board, so we continued doing that,” Sanchez said. “We changed it up and gave him some different looks in the second half that produced those turnovers.”

A 7-yard run by Francoise Sims II was the final touchdown of the day. Collectively, Sims, Herburger and Elijah Preston rushed for 222 yards.

“Because of their defense, trying to take away the running game, we knew we could pass the ball,” Hudson said. “I had to reward the coaches’ faith in me and make plays. I think it forced them to change their strategy, which opened up for Elijah and the other guys.”