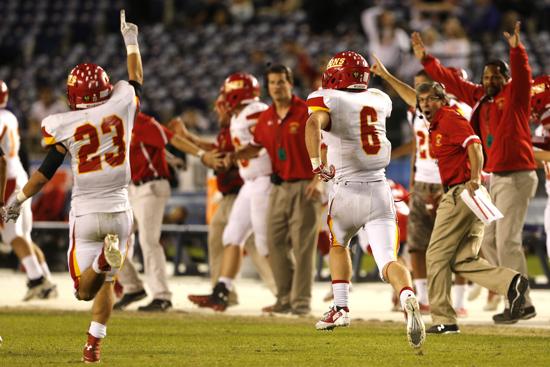 When Cathedral Catholic was ousted during last year’s playoffs after the discovery of an ineligible player, the Dons’ underclassmen vowed to win the 2013 football championship for the departing seniors.

Mark that promise as fully paid off, but it took a historic moment for the Dons to smile again.

Junior linebacker Jack Onstott picked off a pass at the 2-yard line and returned it 98 yards for the title-clinching touchdown in the first overtime football game in San Diego Section championship history for a 37-31 win over San Pasqual to claim the Division I crown Monday afternoon at Qualcomm Stadium.

Onstott’s romp with the pass from San Pasqual quarterback Sebastian Tengan into history came in the third overtime of a game that was tied 17-17 in regulation.

“We’d been looking for that pass all game long,” Onstott said. “The ball came right to me. I caught it and took it to the house.

“I kept running. I never thought of stopping. I saw everyone in the stands in front of me going nuts.

“My head was pounding in overtime. We knew we would win, but I thought it was never going to end.”

Think how last year’s seniors feel now after the Dons’ five-game winning streak handed them the crown they thought they could win in 2012. It was the Dons’ sixth title in the last seven years.

In the first overtime, Tengan hit JaJuan Thomas with a 7-yard touchdown pass for San Pasqual, but Chris Moliga, who rushed 35 times for 168 yards, tied the game at 24-24 with a 1-yard run.

That set the stage for Onstott to decide the game, and keep the team’s promise to the Class of 2013.

“I’ve been here 28 years and there’s never been a bigger interception than that one,” Cathedral coach Sean Doyle said. “San Pasqual should get as much hoopla as we will because this game could have gone either way.”

That was hardly any consolation to the No. 1-seeded Eagles.

“It was an amazing game,” Eagles coach Tony Corley said. “San Diego County should be proud of that game.

“It was two great teams fighting their butts off. Unfortunately, someone has to lose and that’s tough especially since it was us.”

Cathedral took a 10-3 lead on Dale’s touchdown pass to Daniel Plum, set up by Xavier Ulutu’s interception in the second quarter.

San Pasqual evened the game 10-10 at halftime thanks to Jack Hofstetter’s 66-yard interception return for a touchdown with 10 seconds left before intermission.

“I have a spot all picked out in the gym for this banner,” said Onstott. “I can’t wait to call all of last year’s seniors.”