School’s basketball teams finally at home after two years on the road. 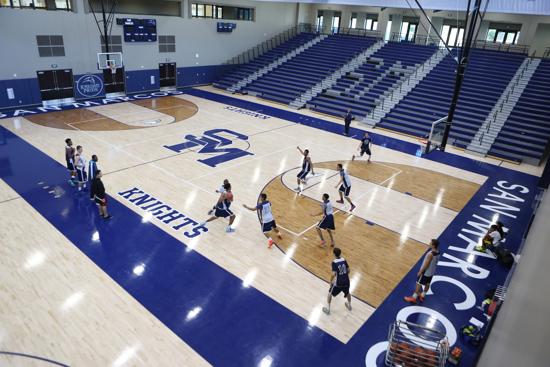 Built as part of Prop K, the $207 million project that called for tearing down and rebuilding the entire campus, the new Knights Center is two months old and still has a new-home smell.

And it looks as good as it smells.

Waifs for two years, practicing at Woodland Park Middle School and on the rubber floor in the San Elijo Middle School gym, the Knights varsity boys squad will play its first home game in the new facility against Valley Center on Dec. 11.

“Last year was terrible,” said sophomore Johnny McWilliam, who burst on the scene as a freshman last season. “We played on a cafeteria floor at San Elijo. When it rained, the kids ate lunch on it, spilled their drinks, left their trash. We had to clean up, then practice on a slippery floor. There were days the gyms were locked and we couldn’t get in.

“Now we’re in the nicest facility in the county.”

The four-story Knights Center seats 3,100, the largest high school gym in the region.

It includes three full courts with drop-down curtains so the varsity, JV and freshman teams can practice at the same time.

There is a parquet floor, similar to the Garden in Boston where the NBA’s Celtics play.

There are two large scoreboards and a drop-down video screen.

There are offices, classrooms, weightrooms, as well as rooms for the dance and cheer teams.

The concession stands are first class.

Paul Savage’s athletic training room is state of the art. After working in a dungeon for years, then in a trailer for two years, he now has a new whirlpool, laundry equipment and tables to accommodate 10 athletes at one time.

While the rest of the campus is still under construction and parking is at a premium, the Knights Center is one of three buildings that have been completed.

And while the boys and girls teams have been practicing in the new facility, the players aren’t sure how it will play.

“We’re still getting used to the rims and the floor,” said senior Ben Perez. “We haven’t practiced with the bleachers down. We don’t know how noisy it will be.

“We’ve got a chance to be pretty good, and our students are great, support us really well. So I think we’ll fill the place a few times.”

San Marcos was 27-6 last season and is 47-16 in the two years since becoming road warriors.

“We played our home games at Mission Hills and as much as they tried to help, it wasn’t really home,” said San Marcos coach Dante Carey. “The Mission Hills gym and ours are very different. They have a lot of room behind the baskets, so the shooting background is tough. Our background is much more shooting friendly.”

The Knights are a run, shoot and get-in-your-face-on-defense team.

After beating Torrey Pines, splitting with Mission Hills and tying the Grizzlies for the Avocado East League title, San Marcos lost by five to Hoover in the San Diego Section Division II semifinals, then beat Lincoln and Villa Park in the state Division II playoffs before losing to Hoover by three.

“We’re full of confidence,” said Pacia. “We made it work the last two years, now we have a new home, great locker rooms.

“It would be awful nice to hang a championship banner in our new house.”