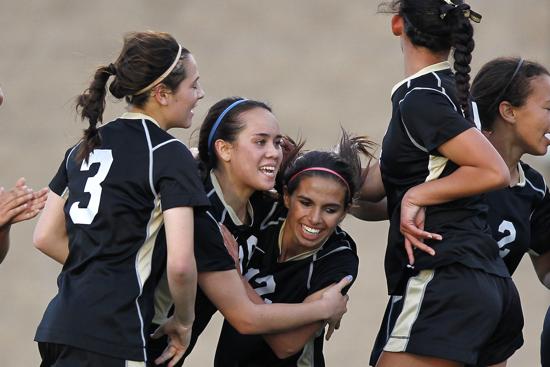 Westview often has reason to celebrate. The Wolverines have won six San Diego Section titles since 2005.

The Open Division of the San Diego Section playoffs debuts with a thud in girls soccer. Excluded is top-ranked Cathedral Catholic, a perennial power allowed under the rules to take only two steps up from Division III. Dons coach Dawn Lee petitioned for Open Division status, but her request was denied since none of the eight teams would voluntarily switch to another division.

All-section selections Hailey Harbison and Angel Meriwether guide Westview, an Open Division member, which last season in Division II won its sixth section title since 2005. The Wolverines also count on the senior goalkeeper combination of Darby Clements and Brittany Viboch. Sophomore Marley Canales, a member of the U.S. U-17 girls national team, figures to have a limited schedule at most.

Expect a strong season from Steele Canyon, which joins the Open Division after just missing the playoff finals last season due to a penalty-kick loss to Westview. Goalkeeper Jessica Warner spearheads seven returning seniors for the Cougars, who are seeking their fifth straight Grossmont Hills League crown. Mariah Voight also anchors the defense with Sierra Nager and Briana Daoust keying the attack.

With offensive stalwart Geny Decker off to Yale, Bishop’s turns to junior Sarah Chase to spearhead the attack. Last season, she recorded 17 goals and 15 assists while drawing on experience in the Olympic Development Program. The Knights, who won the Division IV title last season, move to Division II along with familiar foe Francis Parker and perennial power Coronado in a strong grouping.

What can Eastlake do for an encore after winning its first section championship last season? That title came in Division I as the Titans prevailed in the final over defending champion Carlsbad. Due back are All-Mesa League performers Gillian Stargensky and Ariana Rahim. Eastlake earned membership in the Open Division as did Carlsbad for a possible playoff rematch.