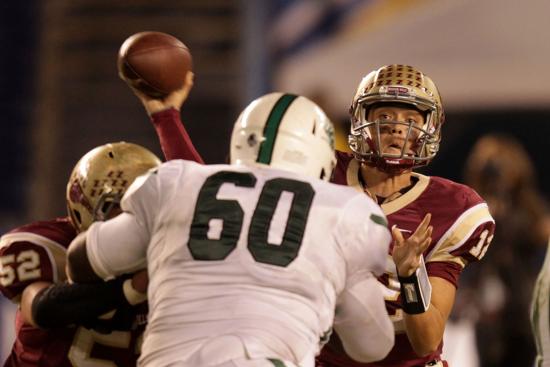 Drillers preview: Bakersfield, the Central Section Division I champion, has won nine games in a row. The Drillers have outscored opponents 579-204 and have scored 60 points once, 40 five times and 50 four times. The team runs a flexbone, triple-option offense and averages 8.4 yards on 502 rushes. The Drillers average 324.4 yards rushing and 103.4 yards passing per game, have scored 82 TDs and punted just 21 times. QB Asauni Rufus leads the offense. He has thrown for 1,280 yards and rushed for 1,568 and 28 TDs. The Drillers have three other backs with at least 478 rushing yards.

Drillers tidbit: Bakersfield’s most famous football alum is Frank Gifford, a member of the Pro Football Hall of Fame.

Grizzlies preview: Mission Hills is the San Diego Section Open Division champion and has won six in a row. The Grizzlies have outscored opponents 466-166. Mission Hills lives with the pass. QB Connor Wynn has completed 161 of 254 passes for 2,060 yards and 27 TDs. He has thrown nine interceptions. Scott Higgins has 63 catches, which ties the school record. LB Ricky Liuchan has moved over to offense, running for 110 yards in the title-game win over Oceanside, a game in which he also scored on an interception return. LB Fred Warner, the section Defensive Player of the Year, leads the defense.

Next: Tonight’s winner plays the NoCal Regional winner — either Loomis Del Oro or San Mateo Serra — in the Division I State Football Championship Bowl at 8 p.m. Dec. 20 at the StubHub Center in Carson.